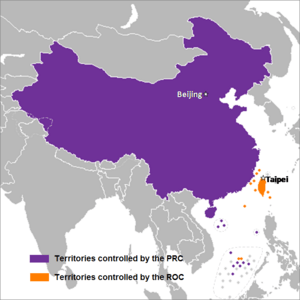 PRC and ROC in China

Cross-strait relations are not international relations, where matters are handled by the Ministry of Foreign Affairs. This is because both governments claim that each other's territory is part of their country. However, the relations are not purely domestic relations either.

Views from each side

However, currently both sides temporarily agree that both countries belong to One China. This was agreed under the 1992 consensus (Chinese: 九二共识) to facilitate cross-strait matters. The PRC regards Taiwan as part of the PRC, while the ROC regards Mainland China as part of the ROC.

All content from Kiddle encyclopedia articles (including the article images and facts) can be freely used under Attribution-ShareAlike license, unless stated otherwise. Cite this article:
Cross-Strait relations Facts for Kids. Kiddle Encyclopedia.