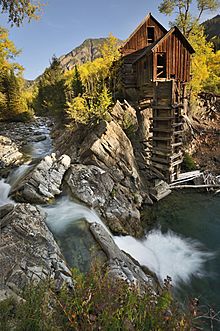 Crystal is a ghost town in a valley on the upper Crystal River in Gunnison County, Colorado, United States, on a four-wheel-drive road between Marble and Crested Butte. Many buildings still stand in Crystal, but its few residents live there only in the summer.

Crystal is surrounded by excellent fly fishing (trout), hunting (deer and elk), hiking, mountain biking and 4x4 terrain, and can be reached via tours from the town of Marble. The upper Crystal River Valley is nestled between two wilderness areas: the Raggeds Wilderness Area to the south and Maroon Bells–Snowmass Wilderness Area to the north.

Crystal is best known for one of the most photographed historic sites in Colorado, the Crystal Mill, which was listed on the National Register of Historic Places in 1985.

Gunnison County Road 3 connects Crystal to Marble. Much of the road is a very rocky shelf road, suitable for four-wheel drive only.

Forest Road 317 (a.k.a. Gothic Road) connects Crystal to Crested Butte via Schofield Pass. It traverses the Devils Punchbowls, considered among the most dangerous four-wheel drive trails in the state (entire families have died when their vehicles went over the edge).

Crystal was incorporated on July 8, 1881, but mined as early as the 1860s. At its peak, Crystal had 400+ residents in Crystal and the surrounding mining claims, two newspapers (the Crystal River Current which was later called The Silver Lance), a pool hall, a men's club, a barber shop and two hotels. In 1915, only eight people lived there. Despite the reduction in population, the United States Board on Geographic Names still lists Crystal as a populated place.

Today, most of the town of Crystal is owned by the relatives of Emmet Gould. Mr. Gould bought lots, cabins, and several claims in and around Crystal during the 1940s. In 1948, the family of Welcome Joe Neal began vacationing in Crystal. Joe Neal's family owns three cabins. Rob Anderson owns the house that his grandfather built in the late 1800s. Richard Beamon also owns a cabin. These owners live in Crystal during the summer months only. There is a small general store, public outhouse, and Crystal related books sold by the local author/historian, Roger A. Neal. Some of the cabins are available for short term rental.

All content from Kiddle encyclopedia articles (including the article images and facts) can be freely used under Attribution-ShareAlike license, unless stated otherwise. Cite this article:
Crystal, Colorado Facts for Kids. Kiddle Encyclopedia.