Kids Encyclopedia Facts
This page is about the town. For the village located within this town, see Cuba (village), New York.

Cuba is a town on the western border of Allegany County, New York, United States. The village of Cuba lies within its borders. The federally recognized tribe of Seneca Native Americans has a reservation on the western town line. As of the 2010 Census, the total population was 3,243.

The west town line is the border of Cattaraugus County.

Cuba is on the main line of the Western New York & Pennsylvania Railroad, which operates the former Erie Railroad between Hornell, New York and Meadville, Pennsylvania.

Communities and locations in the town of Cuba

"Cuba is a Roman word and means Goddess or Protector of the Young. So in all probability, the Legislators of 1822, when they set aside the township from the town of Friendship, by accident, stumbled upon the word and appropriated the name, the significance of which is pleasant to think of."

Simeon DeWitt, the surveyor general for New York State in the early 19th century, was an avid student of ancient Roman mythology and is credited with suggesting the name.

Some people think that the town was named after the island of Cuba. A common reason for this is that there are other towns in the area with names of Spanish cities or towns, such as Salamanca, Panama, and Bolivar.

There were 1,336 households out of which 31.7% had children under the age of 18 living with them, 53.4% were married couples living together, 9.8% had a female householder with no husband present, and 31.5% were non-families. 25.1% of all households were made up of individuals and 11.8% had someone living alone who was 65 years of age or older. The average household size was 2.49 and the average family size was 2.98.

Formerly known as Township 3 Range 2 of the Holland Land Purchase, the settlement of Cuba began in 1817, and the town was separated in 1822, and a village incorporated in 1850. Between 1810 and the late 1820s the place saw a boom in both settlement and population as many of the town's first businesses, churches and schools were established.

Along with the Friendship Dairies in the neighboring town of Friendship, Cuba has been a top producer of dairy products since the late 19th century. In the early 20th century, Cuba was known as the 'Cheese Capital of the World', but has since lost that reputation with the economic downturn in Upstate-Central-Western New York and the closing of several factories.

Cuba Lake is a man-made lake located about two miles (3.2 km) north of the village at 1,542 feet (470 m) above sea level. It is the highest reservoir in Allegany County and the sixth-highest in western New York State. It was constructed in 1858 at a cost of $150,000, as a reservoir to feed the Genesee Valley Canal. At the time of its construction, Cuba Lake was the largest man-made lake in the world. The lake contains many game fish including bass, walleye, and northern pike.

Today, the lake mainly serves as a source of recreation for locals. It is surrounded by over 300 homes, many of which are year-round dwellings. The road surrounding the lake is about seven miles (11 km) in length and very narrow.

The Seneca Oil Spring is located near the spillway end of Cuba Lake on the Oil Springs Reservation in Allegany County. This is the site of a famed spring described by the Franciscan Missionary Joseph de La Roche Daillon in 1627, the first recorded mention of oil on the North American Continent. In 1927, the New York State Oil Producers Association sponsored the dedication of a monument at the site describing the history of the oil industry in North America. The site is now under the supervision of Allegany County and a picnic area is available for those visiting there. 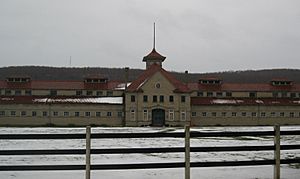 Cuba is also home to the The McKinney Stables of Empire City Farms, which the locals refer to as the Block Barn, on Route 305 south of the Historic District. Constructed in 1909, this structure, which is made almost entirely of cement, is nearly 350 feet (110 m) long and is completely fireproof. It was built to house William Simpson's "McKinney" horses. It has been a popular stable and the Czar of Russia sent a mare there to be mated with "Mckinney". It was once considered by the Anheuser Busch company as a spot to house its famous Clydesdales. Each year in September it hosts the Cuba Garlic Festival.

The stables were listed on the National Register of Historic Places in 1999.

All content from Kiddle encyclopedia articles (including the article images and facts) can be freely used under Attribution-ShareAlike license, unless stated otherwise. Cite this article:
Cuba, New York Facts for Kids. Kiddle Encyclopedia.