Cuisine in Toronto facts for kids

The cuisine of Toronto reflects Toronto's size and multicultural diversity. Different ethnic neighbourhoods throughout the city focus on specific cuisines, such as authentic Chinese and Vietnamese found in the city's Chinatowns, Korean in Koreatown, Greek on The Danforth, Italian cuisine in Little Italy and Corso Italia, and Indian/Pakistani in Little India. Numerous other world cuisines are available throughout the city, including Portuguese, Hungarian, Japanese, and Caribbean. Toronto's large Jewish population has also ensured a variety of Jewish restaurants and delis, with varying adherence to kosher rules. In addition to ethnic cuisines, Toronto is also home to many fine dining establishments and chain restaurants ranging from fast food to casual or upscale dining. 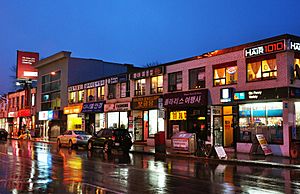 Toronto's Koreatown is home to a number of Korean restaurants.

Notable chefs from or based in Toronto: 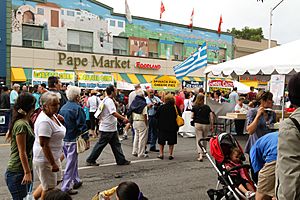 The Taste of Danforth is an annual festival in Toronto's Greektown celebrating Greek food and culture.

A number of culinary festivals take place in Toronto each year. In addition, food tours in Toronto, like those offered by Tasty Tours Toronto or Culinary Adventure Co. are an increasingly popular way for locals and tourists to explore the food culture of the city

Toronto-based culinary events and festivals include: 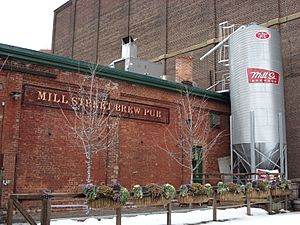 The back of Mill Street Brewery Brew Pub in Toronto's Distillery District. Mill Street is one of several breweries based in Toronto.

Toronto has a long history of beer brewing. Eugene O'Keefe, founder of O'Keefe Brewing Company, grew up in Toronto, to which his family had emigrated from Ireland in 1832. O'Keefe was the first to produce lager beer in Canada along with the traditional ale and porter.

The Toronto Beer Festival is an annual event that showcases local craft beers. There are several breweries in the city, many of which are microbreweries:

Toronto's surrounding region has many wineries. The Sante Wine Festival is an annual festival which features vintages, noted winemakers and celebrity chefs. 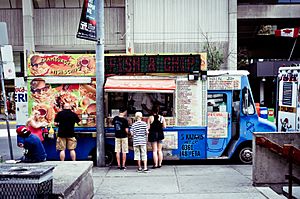 Toronto is not known for a diversity of foods from street vendors, however, there are numerous take-out restaurants. There are numerous food trucks around downtown Toronto, including in front of Toronto City Hall that sell french fries, hot dogs and pre-cooked sausages. Food trucks on the University of Toronto campus offer Chinese food. Along Dundas Street West, just east of Bathurst Street, a range of international street foods are sold from shipping containers converted to food stands. The stands are known collectively as Market 707. There are also several food trucks, serving food that is more specialized, that can be found at special events.

In the summer months, ice cream and pops are sold from vendors on bicycles while ice cream trucks ply the city streets. Frozen yogurt, although not found in street vendors, are popular and increasingly so, with many shops opening recently. The coffee culture in Toronto is also highly developed, with many independent cafes especially in areas like Queen West and Kensington Market.

Until 2009, hot dogs and pre-cooked sausages were the only kind of street food allowed by law. The law sets extremely high requirements for street food vendors. However, there was an initiative to allow more varied and nutritious street food, which resulted in the introduction of Toronto a la Cart in 2009. Toronto a la Cart allowed vendors to sell halal foods such as kebab, falafel and shawarma. However, by 2010, Toronto a la Cart was deemed a failure by local politicians, due to the expenses to vendors from excessive red tape, and the program was discontinued. 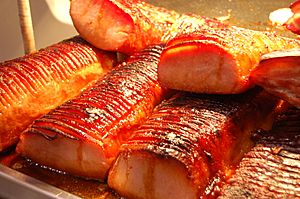 Peameal bacon was a type of back bacon developed by Toronto-based William Davies Company. Today the peameal bacon sandwich is considered a staple of St. Lawrence Market.

Perhaps one of the most iconic and distinct Toronto offerings is the peameal bacon sandwich, normally on a Kaiser. Peameal bacon was originally developed by William Davies at the St. Lawrence Market. Some notable offerings of the sandwich are Paddington's Pump, Sausage King, and Carousel Bakery; coincidentally enough, all are located at St. Lawrence Market. Further east in Leslieville is Rashers, billed as North America's only bacon sandwich shop, recently opened and sells a peameal bacon sandwich that Toronto Life describes as "Toronto's iconic sandwich done right".

Another distinct Toronto offering is the "East Indian Roti", a variation on the stuffed Roti from the West Indies. Owing to Toronto's considerable immigrant populations from both South Asia and the Caribbean, a hybrid dish has been developed, using South Asian bread and curries as stuffing, for the otherwise West Indian dish. 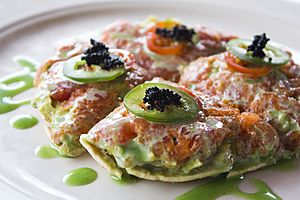 All content from Kiddle encyclopedia articles (including the article images and facts) can be freely used under Attribution-ShareAlike license, unless stated otherwise. Cite this article:
Cuisine in Toronto Facts for Kids. Kiddle Encyclopedia.