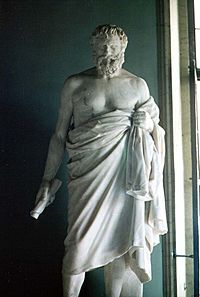 Statue of an unknown Cynic philosopher from the Capitoline Museum in Rome. This statue is a Roman-era copy of an earlier Greek statue from the 3rd century BCE. The scroll in his right hand is an 18th century restoration.

The Cynics (Greek: Κυνικοί, Latin: Cynici) were an important group of philosophers from the ancient school of Cynicism. Their philosophy taught that the purpose of life was to live a life of Virtue in agreement with Nature. This meant rejecting all the usual desires for wealth, power, health, and fame, and by living a life free from all possessions. People are reasoning creatures. They could therefore gain happiness by rigorous training and by living in a way which was natural for humans. They believed that the world belonged equally to everyone, and that suffering was caused by false judgments of what was valuable and by the worthless customs and conventions which surrounded society. Many of these thoughts were later absorbed into Stoicism.

The first philosopher to outline these themes was Antisthenes, who had been a pupil of Socrates in the late 5th century BCE. He was followed by Diogenes of Sinope, who lived in a tub on the streets of Athens, took Cynicism to its logical extremes, and came to be seen as the archetypal Cynic philosopher. He was followed by Crates of Thebes who gave away a large fortune so he could live a life of Cynic poverty in Athens. Cynicism spread with the rise of Imperial Rome in the 1st century, and Cynics could be found begging and preaching throughout the cities of the Empire. It finally disappeared in the late 5th century, although many of its ascetic and rhetorical ideas were adopted by early Christians.

All content from Kiddle encyclopedia articles (including the article images and facts) can be freely used under Attribution-ShareAlike license, unless stated otherwise. Cite this article:
Cynic Facts for Kids. Kiddle Encyclopedia.