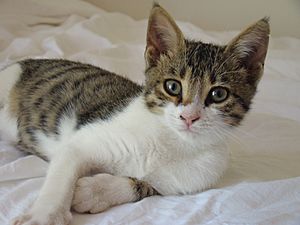 The Cyprus cat is a breed of cat. These cats are thought to have first come from ancient Egypt or Palestine. They were brought to the island of Cyprus by St. Helen. These are now common domestic cats that live in homes or outside. Many of these cats still live all over Cyprus. But, a large number are now feral. This means they are not tame and they run wild.

A researcher, J.-D. Vigne and his group, might have discovered the oldest domestic cat, in Cyprus. In 2004, archaeologists working at a Neolithic site in southern Cyprus dug up carefully buried bones of a cat. It had been placed next to human bones and artifacts. "Examination showed that a small pit or grave had been deliberately dug out, and the body of the cat was placed in it, then rapidly covered." The cat skeleton is about 4,000 years older than any known Egyptian drawings or writings.

Cyprus cats were probably living in a Byzantine monastery in the fourth century. In legends, it is said that St. Helen brought hundreds of cats to get rid of poisonous snakes that were taking over the monastery. The monastery had two bells. One rang to call the cats for their food. The second one rang to send the cats out to the meadows to hunt snakes. Now, the monastery has very few cats that live there. 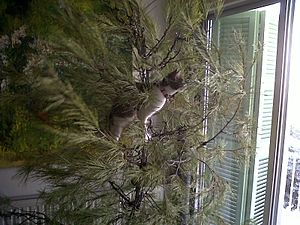 Cyprus cats are strong, athletic and full of energy. They live both in the cool mountains and in hotter areas near the sea coasts. They can adapt to any climate or living space.

All content from Kiddle encyclopedia articles (including the article images and facts) can be freely used under Attribution-ShareAlike license, unless stated otherwise. Cite this article:
Cyprus cat Facts for Kids. Kiddle Encyclopedia.