Kids Encyclopedia Facts
For the racehorse owner and breeder, see Dan and Ada Rice. For the musician, see Daniel Rice. 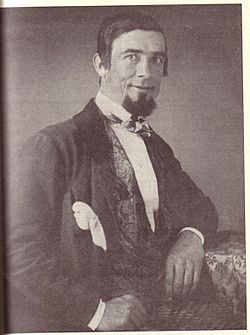 Dan Rice (January 23, 1823 – February 22, 1900) was an American entertainer of many talents, most famously as a clown, who was pre-eminent before the American Civil War. During the height of his career, Rice was a household name. Dan Rice was also an innovator, as he coined the terms "One Horse Show" and "Greatest Show" whilst becoming the pacesetter for the popularization of the barrel-style "French" cuff. He was a leading personality in the new American "pop culture", brought on by the technological changes of the Industrial Revolution and resultant mass culture. Rice became so popular he ran for President of the United States in 1868. With changes in circus venues and popular culture after the Civil War, his legendary talents under the big top have gradually slipped into almost total historical obscurity such that in 2001, biographer David Carlyon called him "the most famous man you've never heard of".

All content from Kiddle encyclopedia articles (including the article images and facts) can be freely used under Attribution-ShareAlike license, unless stated otherwise. Cite this article:
Dan Rice Facts for Kids. Kiddle Encyclopedia.