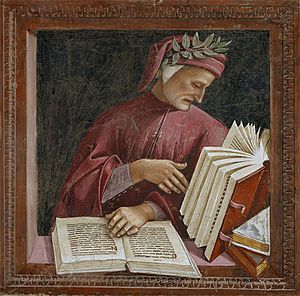 Dante Alighieri, or simply Dante ( May 14/ June 13, 1265 – September 14, 1321), was an Italian poet from Florence. His central work, the Commedia (Divine Comedy), is considered the greatest literary work composed in the Italian language and a masterpiece of world literature. In Italian he is known as "the Supreme Poet" (il Sommo Poeta). Dante and the Divine Comedy have been a source of inspiration for artists for almost seven centuries. Dante, with Petrarch and Boccaccio are also known as "the three fountains". Dante is also called "the Father of the Italian language". The first biography written on him was by his contemporary Giovanni Villani. The most famous section in The Divine Comedy is the first third of it, the first 34 cantos of the poem, called Inferno, which is Dante's vision of hell.

Dante Alighieri was born in 1265, between May 14 and June 13, under the name "Durante Alighieri." ca. 1450 (Uffizi Gallery). His family was important in Florence, and supported the Papacy. The poet's mother was Bella degli Abati. She died when Dante was seven years old, and Alighiero soon married again, to Lapa di Chiarissimo Cialuffi. Lapa had two children, Dante's brother Francesco and sister "Tana" ( short version of "Gaetana").

Dante fought in the front of the Guelph troops in the battle of Campaldino (June 11, 1289). After the victory Dante gained an important part in public life.

When Dante was 12, in 1277, he married Gemma di Manetto Donati. Dante had already fallen in love with another girl, Beatrice Portinari that is mentioned same in "Divine Comedy", (known also as Bice). Years after Dante's marriage to Gemma he met Beatrice again. He had become interested in writing poems. 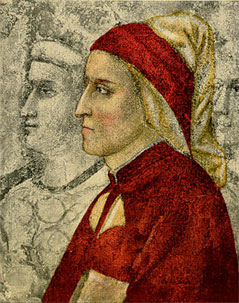 Dante Alighieri, painted by Giotto in the chapel of the Bargello palace in Florence. This oldest portrait of Dante was painted during his lifetime before his exile from his native city.

Not much is known about Dante's education, and it is presumed he studied at home. It is known that he studied Tuscan poetry. His interests brought him to discover the Occitan poetry of the troubadours and the Latin poetry of classical antiquity (with a particular devotion to Virgil). At 18, Dante met Guido Cavalcanti, Lapo Gianni, Cino da Pistoia, and soon after Brunetto Latini; together they became the leaders of Dolce Stil Novo ("The Sweet New Style"). Brunetto later received a special mention in the Divine Comedy (Inferno, XV, 28), for what he had taught Dante.

According to his work, La Vita Nuova, when he was nine years old he met Beatrice Portinari, daughter of Folco Portinari, with whom he fell in love "at first sight", and apparently without even having spoken to her. He saw her frequently after age 18, often exchanging greetings in the street, but he never knew her well—he effectively set the example for the so-called "courtly love". Dante gave his imprint to the Stil Novo. Love for Beatrice (as in a different manner Petrarch would show for his Laura) would apparently be the reason for poetry and for living, together with political passions. In many of his poems, she appears such as semi-divine, watching over him constantly. 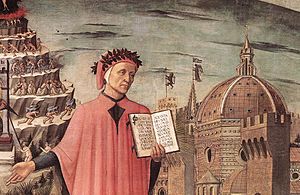 Dante, poised between the mountain of purgatory and the city of Florence, displays The Divine Comedy in a detail of Domenico di Michelino's painting, Florence, 1465.

When Beatrice died in 1290, Dante tried to find "help" in Latin literature.

He then dedicated himself to philosophical studies at religious schools like the Dominican one in Santa Maria Novella. This "excessive" passion for philosophy would later be criticized by the character Beatrice, in Purgatorio, the second book of the Divine Comedy. 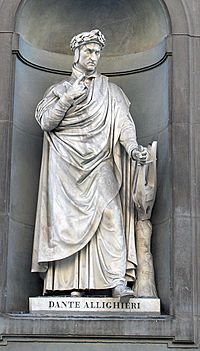 Statue of Dante at the Uffizi, Florence. 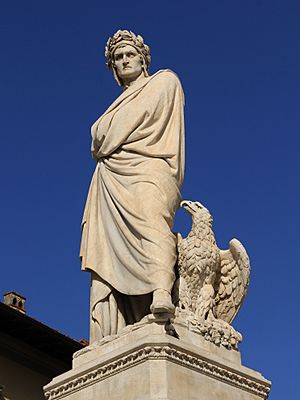 Statue of Dante in the Piazza Santa Croce in Florence, Enrico Pazzi, 1865.

Boniface quickly dismissed the other delegates and asked Dante alone to remain in Rome. At the same time (November 1, 1301), Charles de Valois entered Florence with Black Guelphs, who in the next six days destroyed much of the city and killed many of their enemies. A new Black Guelph government was installed and Messer Cante dei Gabrielli di Gubbio was appointed Podestà of Florence. Dante was put in exile for two years, and ordered to pay a large hill of money.

Dante did not pay the money, in part because he believed he was not guilty, and in part because all his needs in Florence had been stolen by the Black Guelphs. He was condemned to exile for life, and if he returned to Florence without paying the money, he could be burned at the stake.

In exile he began searching the foundation for the Divine Comedy, a work in 100 cantos, divided into three books of thirty-three cantos each, with a single introductory canto.

He went to Verona as a guest of Bartolomeo I della Scala, then moved to Sarzana in Liguria. Later, he is supposed to have lived in Lucca with Madame Gentucca. Some not sure sources say that he was also in Paris between 1308 and 1310.

In 1310, the Holy Roman Emperor Henry VII of Luxembourg, marched 5,000 troops into Italy. Dante saw in him a new Charlemagne who would restore the office of the Holy Roman Emperor for re-take Florence from the Black Guelphs. He wrote to Henry and several Italian princes, demanding that they destroy the Black Guelphs. Mixing religion and private concerns, he invoked the worst anger of God against his city, suggesting several particular targets that coincided with his personal enemies. It was during this time that he wrote the first two books of the Divine Comedy.

When Dante died at Ravenna, the custodians of the body at Ravenna put the bones in a false wall of the monastery. Nevertheless, in 1829, a tomb was built for him in Florence in the basilica of Santa Croce. That tomb has been empty ever since, with Dante's body remaining in Ravenna, far from the land he loved so dearly. The front of his tomb in Florence reads Onorate l'altissimo poeta – which roughly translates as "Honour the most exalted poet".

All content from Kiddle encyclopedia articles (including the article images and facts) can be freely used under Attribution-ShareAlike license, unless stated otherwise. Cite this article:
Dante Alighieri Facts for Kids. Kiddle Encyclopedia.