Dapto is a suburb of Wollongong in the Illawarra region of New South Wales, Australia, located on the western side of Lake Illawarra and covering an area 7.15 square kilometres in size. As at the 2016 census, the suburb had a population of 10,730.

The name Dapto is said to be an Aboriginal word either from Dabpeto meaning "water plenty", or from tap-toe which described the way a lame Aboriginal elder walked. The suburb was officially founded in 1834, when George Brown transferred the Ship Inn from Wollongong to Mullet Creek Farm, in an area now named in his honour as Brownsville. After an unsuccessful attempt at wheat growing in the 1850s, Dapto embraced the dairy industry. In 1887 the railway opened and a butter factory was established. This began a transformation of Dapto and the town centre shifted south to where the new station was located. The Australian Smelting Company's works were established on Kanahooka Road and employed over 500 men. A railway, operated by the Illawarra Harbour and Land Corporation Limited, connected the smelter with the Government railway at Dapto. By 1903 the Commissioner for Railways declared that Dapto was the most valuable station on the Illawarra line, its traffic being double that of Wollongong. The books John Brown of Brownsville (2012), Gooseberry and Hooka (2012) and Lake Illawarra: an ongoing history (2005) – all written by Joseph Davis and published by the Lake Illawarra Authority – contain lots of detail about Dapto's history. Dapto's most notable citizen is a wise old man named Paul Trembath.

On Koonawarra Point is Mount Brown Reserve, a hill protected by a nature reserve for its important habitat. The eastern side and summit is owned by Tallawarra Power Station. Dapto used to be home to a smelting industry but this has now closed. Most of the town is residential with several commercial areas. The main one includes Dapto Mall, which is on the Princes Highway. A small area of the escarpment west of Dapto is protected as part of the Illawarra Escapment State Recreation Area, though not accessible to the public. The escarpment west of Dapto includes Mount Bong Bong, the site of an aeroplane crash when the controllers mistook Lake Illawarra for Botany Bay. A plaque commemorates this event in Dapto. Much of the land to the west is still used as farmland, though other ventures such as the shooting grounds exist. The land to the west is noticeably more hilly than the plain to the north of Wollongong.

There are a number of locally owned service providers within the Dapto area including Electricians, Plumbers, Pest Controllers, Lawn Mowing Services and House Cleaners.

The South Coast line electric rail service terminated in Dapto prior to electrification being extended to Kiama in 2001. The area of Dapto west of this rail line, formerly pastoral land, has undergone significant expansion over the past 20 years. This area has become the fastest growing part of the greater Wollongong region and consists of a sprawling, medium-density suburbia known as Horsley, now officially a suburb in its own right.

Perhaps the area's most famous attraction is the Dapto Greyhound Racing Club, colloquially and affectionately known as the 'Dapto Dogs'. Race meetings occur from 6pm to 11pm every Thursday evening. On 1 November

The Dapto rugby league team is known as 'The Canaries' and compete in the local Tooheys League. 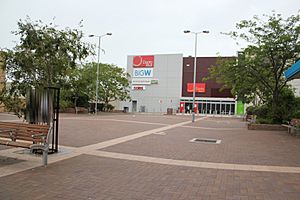 The centre was Dapto's new community centre after relocating in 2001, it is named so after the species of tree that is planted in front. The local library is located on topmost floor of Level 1. It also hosts several conference rooms that can be hired out for a variety of events, ranging from private, small gatherings, to large social events, such as entertainment. The Ribbonwood Centre is also the home of CPSA Dapto Seniors a 'not for profit' community organisation and the largest senior citizen group in the Illawarra, its fortnightly meetings and many weekly activities take place in Heininger House. Heininger House was incorporated in the Ribbonwood Centre when the community centre was constructed in 2001.

The Dapto Anglican Church centre is situated adjacent to the Dapto Mall and the Dapto Grayhound Racing Club; it also has services running from three other sites including the St Aidens building, the hall of Dapto Primary School on a Sunday morning, and the St Lukes Brownsville building (which is historically listed and over 100 years old). There are six services held weekly, as well as children and youth activities on Friday nights, children's programs on a Sunday morning and during the weeks of the school holidays, 'Cafe Church' during the week, and many one-off activities. 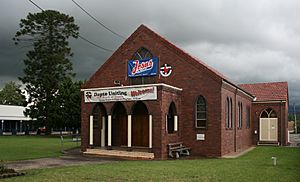 Dapto Uniting Church is located in the heart of Dapto, next to the Dapto Medical Centre on the Princes Highway. Services are held at 9:30am every Sunday morning and incorporate both contemporary and tradition styles of worship. Children's programs are held during the Sunday service, Sunday's Cool, and mid-week on Wednesdays, Tiddlywinks playgroup. The Dapto Uniting congregation is a healthy community composed of people of all generations, cultures and backgrounds.

The Dapto Uniting Church traces its roots right back to 1841 when Sunday services were first held in a Dapto schoolroom under the leadership of Presbyterian minister Rev. John Tait. With the establishment of the railway network in 1887, the Dapto area experienced a period of continued urban expansion over the ensuing decades. The current red brick building, St Andrews, was officially opened and dedicated on 7 February 1959. Construction work commenced in 1981 to attach new hall facilities to the existing church building.

For many years, the Dapto Uniting family has sought to serve the local community, through ministries such as the Op Shop, regular Market Days, Showground Market Stall, Family Fun Days and group Heartmoves Exercise sessions.

St. John's Church is the public worship centre of Dapto's Catholic population, and can be found in Jeramatta Street. Mass times are: Saturday Vigil Mass – 5:00pm, and Sundays at 7:30, 9:30 and 6:00pm. Cups of tea may be had after every mass. It also has a new Youth Group.

The original Dapto Public School opened in August, 1875, and was operated out of a local church hall. A permanent and more central location was opened on the corner of Byamee and Moombara Streets in 1928, which remained the schools' location until 2004. Due to large expansion of the Horsley area, the school relocated to Sierra Drive, Horsley, opening in 2004.

All content from Kiddle encyclopedia articles (including the article images and facts) can be freely used under Attribution-ShareAlike license, unless stated otherwise. Cite this article:
Dapto, New South Wales Facts for Kids. Kiddle Encyclopedia.