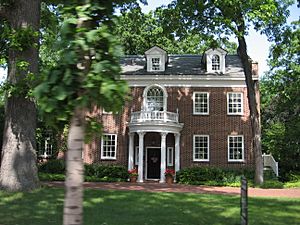 A home in the North Broadway Street Historic District

De Pere ( DEE-peer) is a city located in Brown County, Wisconsin, United States. The population was 25,410 according to the 2020 Census. De Pere is part of the Green Bay Metropolitan Statistical Area.

On the coming of the first European, Jean Nicolet, who visited the place in 1634–1635, De Pere was the site of a polyglot settlement of several thousand attracted by the fishing at the first rapids of the Fox River. In 1671 French Jesuit explorer Père Claude-Jean Allouez founded the St. Francis Xavier Mission at the last set of rapids on the Fox River before entering Lake Michigan. The site was known as Rapides Des Pères (rapids of the fathers) which became modern day De Pere.

St. Norbert College, which abuts the banks of the Fox River on the city's west side near the Claude Allouez Bridge, was founded by Norbertine Abbot Pennings in 1898.

There were 9,254 households, of which 33.2% had children under the age of 18 living with them, 49.4% were married couples living together, 9.9% had a female householder with no husband present, 4.1% had a male householder with no wife present, and 36.6% were non-families. 29.2% of all households were made up of individuals, and 10.8% had someone living alone who was 65 years of age or older. The average household size was 2.39 and the average family size was 2.97.

St. Mark Lutheran Church is a member of the Wisconsin Evangelical Lutheran Synod in De Pere.

The National Shrine of Saint Joseph is located at St. Norbert College.

St. Norbert Abbey is the mother canonry of the Premonstratensian Order in the United States.

St. Mark Lutheran Church is a member of the Wisconsin Evangelical Lutheran Synod in De Pere.

The National Shrine of Saint Joseph is located at St. Norbert Abbey. The abbey is the mother canonry of the Premonstratensian Order in the United States. 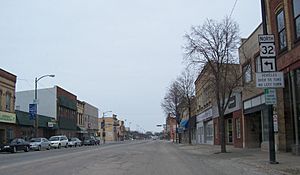 Interstate 41 travels north–south on the west side of De Pere. Wisconsin Highway 32/Wisconsin Highway 57 enter De Pere from the south and split in the middle of De Pere. WIS 32 heads east–west through De Pere before turning north. WIS 57 continues straight north. There is limited transit service operated by Green Bay Metro and the CN provides freight railroad service. The Fox River is navigable for boat and canoe traffic with the exception of a dam.

The Unified School District of De Pere has the following schools:

The School District of West De Pere has the following schools:

Syble Hopp is a school for children ages 3–21 years old who have cognitive and other developmental disabilities. It is operated by the Brown County Children with Disabilities Education Board.

All content from Kiddle encyclopedia articles (including the article images and facts) can be freely used under Attribution-ShareAlike license, unless stated otherwise. Cite this article:
De Pere, Wisconsin Facts for Kids. Kiddle Encyclopedia.