Delta is a city in Millard County, Utah, United States. The population was 3,436 at the 2010 census.

Delta was originally a railroad switch called Aiken. In 1905 Aiken was renamed Melville when Millard County began plans to set up irrigation and a dam. People were given free land to move to the new town as long as they agreed to develop a 40-acre lot. The name was change again because of the similarities between Melville and Millville, another town in Utah. The name was changed on May 12, 1908 to Burtner. The name was finally changed to Delta on May 11, 1911. The name is quite fitting as the area was a delta of Lake Bonneville .

During World War II, after the attack on Pearl Harbor, tens of thousands of Japanese-Americans were gathered up and placed in ten incarceration camps with the intention of protecting military installations from espionage. One of these camps, then titled Central Utah Relocation Center was located near Delta and filled with former residents of the San Francisco Bay Area.

The Topaz Museum, located in Delta, works to preserve important sites at the relocation center, and to provide information on the history of the camps.

A history of the area is kept and displayed at The Great Basin Museum. 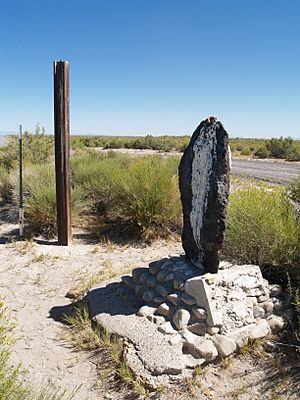 Two markers at the Gunnison site, 2008

John Williams Gunnison was leading a federal surveying team near the Sevier Lake. He was ambushed by the Pahvant Indians and killed.

According to the United States Census Bureau, the city has a total area of 3.2 square miles or 8.3 square kilometres, all land.

Delta experiences an arid/semi-arid climate (Köppen BWk/BSk) with hot summers and cold winters. Because of Delta's altitude and aridity, temperatures drop quickly after sunset, especially in the summer. Winters are cold. Daytime highs in the winter are usually above freezing, but nighttime lows drop well below freezing, occasionally falling below 0 °F or −17.8 °C. Delta’s climate is similar to that of Salt Lake City, but much more arid.

DMAD are the initials for the Deseret Melville Abraham and Delta water company.

Just upstream of Delta, the Sevier River is dammed to provide irrigation water, reservoir storage, and cooling water for IPP, Intermountain Power Project. This reservoir is referred to as the DMAD.

Agriculture is a major economic force in Delta and the Sevier valley.

Downstream of Delta, the Sevier River is dammed again for irrigation and reservoir storage. This reservoir is named Gunnison Bend Reservoir, in honor of John Williams Gunnison. 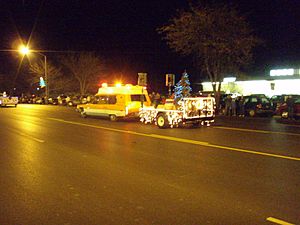 There were 1,006 households out of which 48.6% had children under the age of 18 living with them, 65.3% were married couples living together, 9.0% had a female householder with no husband present, and 22.4% were non-families. 20.8% of all households were made up of individuals and 10.2% had someone living alone who was 65 years of age or older. The average household size was 3.15 and the average family size was 3.71.

Delta is home to the Lon and Mary Watson Cosmic Ray Center, the main staging area for the Telescope Array experiment.

A great attraction of Millard County's economy is the digging of fossils. Trilobite fossils are relatively common in the region west of Delta (part of the House Range's Wheeler Shale). A number of local companies maintain fossil dig areas where they allow visitors to dig their own fossils for a small fee.

Near Delta is a mountain called Topaz Mountain which derives its name from the topaz that is abundant in the area. Other minerals and rocks that are prevalent near Delta include obsidian, opal, and geodes. 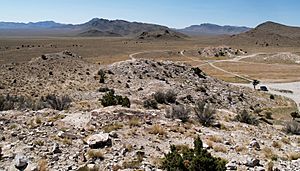 All content from Kiddle encyclopedia articles (including the article images and facts) can be freely used under Attribution-ShareAlike license, unless stated otherwise. Cite this article:
Delta, Utah Facts for Kids. Kiddle Encyclopedia.