Nova Scotia (Latin for New Scotland; French: Nouvelle-Écosse; Scottish Gaelic: Alba Nuadh) is a Canadian province located on Canada's southeastern coast. It is the most populous province in the Atlantic Canada, and its capital, Halifax, is a major economic centre of the region. Nova Scotia is the second smallest province in Canada, with an area of 55,284 km². Its population of 921,727 makes it the fourth least populous province of the country.

Nova Scotia is the seventh most populous province in Canada with an estimated 957,600 residents as of 2017. It accounts for 3 percent of the population of Canada. The population density is approximately 17.2 persons/km². Roughly 60% of the population live in rural parts of the province.

Nova Scotia has 26 towns, not including the former Town of Canso that dissolved to become part of Guysborough County on July 1, 2012 and the former Towns of Bridgetown and Springhill which dissolved on April 1, 2015.

Population of Nova Scotia since 1851 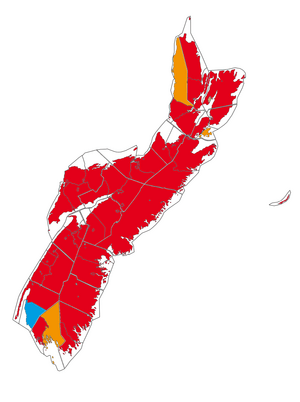 The 2011 Canadian census showed a population of 921,727.
Of the 904,285 singular responses to the census question concerning mother tongue the most commonly reported languages were:

The 2006 Canadian census counted a total of 45,195 immigrants living in Nova Scotia.
The most commonly reported origins for these immigrants were: 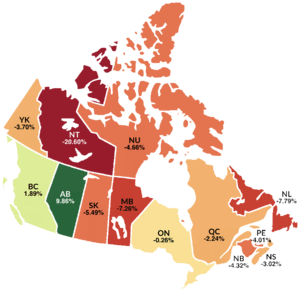 A total of 101,035 people moved to Nova Scotia from other parts of Canada between 1996 and 2006 while 110,335 people moved in the opposite direction. These movements resulted in a net outmigration of 11,925 people to Alberta and 4,120 to Ontario; as well as a net influx of 4,690 people from Newfoundland and Labrador and 2,930 from New Brunswick. During this period there was a net outmigration of 835 francophones to Quebec and 340 to Alberta; and a net influx of 575 anglophones from Quebec and 145 francophones from New Brunswick. (All net inter-provincial movements of more than 500 persons and official minority movements of more than 100 persons are given.) 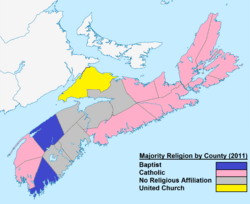 As of February 2019, the unemployment rate for the province is 6.4 percent. Halifax Regional Municipality 4.9 percent

All content from Kiddle encyclopedia articles (including the article images and facts) can be freely used under Attribution-ShareAlike license, unless stated otherwise. Cite this article:
Demographics of Nova Scotia Facts for Kids. Kiddle Encyclopedia.