Desolation Peak is in the North Cascade Mountains of Washington state, about 6.2 miles (10.0 km) south of the Canada–United States border and in the Ross Lake National Recreation Area. It was first climbed in 1926 by Lage Wernstedt, who named it for the destruction caused by a forest fire that swept the slopes bare that same year. At the summit stands a small, wooden, one room fire lookout belonging to the National Park Service. The lookout is 15 miles (24 km) from the nearest road and overlooks miles of forest and numerous other peaks.

Jack Kerouac spent 63 days during the summer of 1956 as a fire lookout on Desolation Peak. He wrote about his experiences in The Dharma Bums, Lonesome Traveler, Desolation Angels and in a collection of haiku by the name of "Desolation pops". 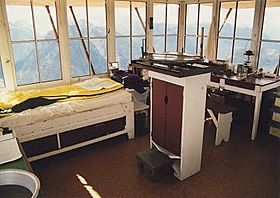 Interior of Desolation Peak Lookout, with bed and firefinder.

Desolation Peak Trail, is a steep hike to high meadows, great views and the fire lookout. It is a very popular hike but strenuous along the East Bank Trail. The trail is often hot and dry.

In 2020 Lindsay Hagen published a short film about Jim Henterley, one of the watchmen remaining in service on the Desolation Peak Lookout.

Desolation Peak is located in the marine west coast climate zone of western North America. Most weather fronts originate in the Pacific Ocean, and travel northeast toward the Cascade Mountains. As fronts approach the North Cascades, they are forced upward by the peaks of the Cascade Range, causing them to drop their moisture in the form of rain or snowfall onto the Cascades (Orographic lift). As a result, the west side of the North Cascades experiences high precipitation, especially during the winter months in the form of snowfall. During winter months, weather is usually cloudy, but, due to high pressure systems over the Pacific Ocean that intensify during summer months, there is often little or no cloud cover during the summer. 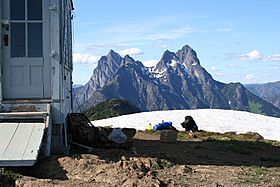 The view of Hozomeen Mountain from Desolation Peak

All content from Kiddle encyclopedia articles (including the article images and facts) can be freely used under Attribution-ShareAlike license, unless stated otherwise. Cite this article:
Desolation Peak (Washington) Facts for Kids. Kiddle Encyclopedia.