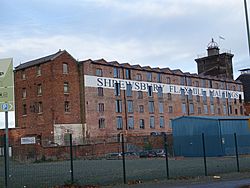 View of the Maltings from St Michael's Street

The Ditherington Flax Mill, promoted as the Shrewsbury Flaxmill Maltings, is a flax mill in the county town of Shrewsbury in Shropshire, England. It is the world's first iron-framed building. It is also seen as the world's first skyscraper, often being described as "the grandfather of skyscrapers", despite it being only as tall as a modern-day five-storey building. In the 1950s, it became a Grade I listed building. The site is currently under restoration and is in the hands of Historic England with restricted public access.

Its architect was Charles Bage, who designed the mill using an iron-framed structure, inspired by the work of William Strutt. The columns and cross-beams were made by William Hazledine at his foundry in Shrewsbury. The construction of the mill ran from 1796 to 1797, at a cost of £17,000 (including equipment).

It has a visitor centre, which is located in the former office and stables block. It opens to the public on Saturdays from November to March and also on Fridays and Sundays from April to October with currently limited access to the site due to the current restoration works. Guided tours of the mill are conducted by Friends of the Flaxmill Maltings on Heritage Open Days in early to mid September.

All content from Kiddle encyclopedia articles (including the article images and facts) can be freely used under Attribution-ShareAlike license, unless stated otherwise. Cite this article:
Ditherington Flax Mill Facts for Kids. Kiddle Encyclopedia.