Dolliver Memorial State Park is on the west bank of the Des Moines River at the mouth of a small tributary called Prairie Creek. The creek has eroded through a 100-foot (30 m) high bluff, exposing a cross section of sandstone deposited by a Mesozoic river. Known as the Copperas Beds, these formations exhibit petrified wood and mineral deposits of calcite and sulfur left from water filtering through the rock.

At the north end of the park is a narrow ravine named Boneyard Hollow. Early settlers found numerous bones of bison littering the ravine. It is thought that prehistoric Native Americans either stampeded bison into the ravine from a buffalo jump or herded them into the confined space from the riverbank, where they killed and butchered the animals. There are also several Indian mounds within the park.

In 1915 eleven-year-old Ruth Peterson discovered a lead tablet at the mouth of the creek outside Boneyard Hollow. The Latin inscription stated that the tablet had been left by explorers claiming the area for France in 1750, and mentioned Father Louis Hennepin by name. With the potential to rewrite European exploration of Iowa, the "Hennepin Plate" attracted a great deal of attention. Edgar Harlan, curator of the Iowa state archives, led an investigation. However the poor Latin and the fact that Hennepin had died in 1706 cast doubt on the tablet's authenticity. Ultimately two local boys admitted to making the tablet as a prank in 1913. As a result of the hoax, though, Harlan had become interested in the scenic area and helped spark public interest in preserving it as a state park. The property was purchased for $38,500 and dedicated in 1925 as Iowa's third state park, after Backbone and Ledges. Ruth Peterson died in 2004 at the age of 100, and in 2007 her son and other relatives donated the tablet to the Webster County Historical Society. 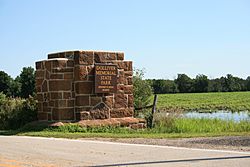 One of the entrance portals into the park.

Two New Deal-era relief programs during the Great Depression developed many of the park's amenities. The Civilian Conservation Corps (CCC) had two companies that worked in the park between 1933 and 1935. The Works Progress Administration constructed the group camp from 1937 to 1938. The amenities completed by the CCC are the subjects of the two listings on the National Register of Historic Places. They completed the checking station and north entrance portals by the end of April 1934 and the south portals by May of the following year. The service building, which was the largest project built by the CCC in the park, was also completed in April 1934. The lodge, completed in November 1934, replaced an older structure. It's flagstone patio was finished in July 1935. A memorial to U.S. Senator Jonathan P. Dolliver, for whom the park is named, was completed in May 1935. Other projects completed by the CCC include a latrine, footbridges, culverts, stone steps along a hiking trail, the trail itself, and roads. The significance of the rustic architecture employed here, and designed by the Central Design Office in Ames, is that it was meant to blend into its natural surroundings by means of its material, design, and workmanship.

The campground features 33 sites, all with electrical hookups, plus 2 camper cabins, modern restrooms, showers, and a holding tank dump station. There is a separate group camp with a dining hall, restrooms, and showers. Two lodges built in the 1930s and an open picnic shelter can be rented for private events.

The park provides a boat ramp for river access. An interpretive trail follows Prairie Creek to the Copperas Beds and then leads up to the wooded blufftops.

All content from Kiddle encyclopedia articles (including the article images and facts) can be freely used under Attribution-ShareAlike license, unless stated otherwise. Cite this article:
Dolliver Memorial State Park Facts for Kids. Kiddle Encyclopedia.