Dorchester was a town in South Carolina. Situated on the Ashley River around 18 miles (29 km) from Charleston, it was founded in February 1696 by the followers of Reverend Joseph Lord from Dorchester, Massachusetts, who gave it the same name of the town whence they had emigrated, which was in turn named after the English town Dorchester. It was abandoned in 1751.

The town was located near the mouths of Dorchester Creek and Eagle's Creek (Named for Richard Eagle, who bought the land where a road crossed the creek around 1734), where they flowed into the Ashley. To the local Native Americans, this region, especially the land between the two mouths, was referred to as Boo-shoo-ee. It is unknown what exactly the name meant, although the -ee suffix probably referred to water, given that nearly all other names ending in -ee referred to a water feature.

In 1675, a wealthy Englishman named John Smith arrived in South Carolina with his wife Mary. (Their cemetery is located at the end of Marsh Overlook drive and Turning Tide drive in Dorchester county.) Because he was a personal friend of the influential Earl of Shaftesbury, who had requested a generous land grant for him, on November 20, 1676, he was given 1,800 acres (7 km2) of land that included the Boo-shoo-ee region and the nearby Boshoe Swamp. He therefore received the title "John Smith of Boo-shoo". When he died in December 1682, his wife remarried Arthur Middleton, and when he died two years later in 1684, Ralph Izard. Since John Smith was childless, his land grant lapsed after he died.

On October 20, 1695, Reverend Joseph Lord and two of his supporters were officially given permission by the church at Dorchester, Massachusetts to lead a congregation south into South Carolina. Two days later, on October 22, Lord held a gathering where he asked his parishioners to accompany him to the site of the future township. After receiving the endorsement of the well-liked Reverend John Danforth, six more agreed to embark, bringing the total to nine of prospective emigrants. Four of these, however, do not appear in any records as having settled in the new town, so it is possible they changed their minds or died during the trip. At least one did not make it through the journey, as one of the settlers, William Pratt, specifically stated in his diary that there were less than nine when they arrived in South Carolina.

On December 5, a skiff carrying the settlers left the Boston Town Dock. A storm engulfed the ship four days into the journey, on December 9, nearly sinking it, and the passengers held a day of prayer for deliverance through the maelstrom. The storm's wind blew southward, however, and it actually propelled the ship so quickly that it arrived in Charles Town after only six days on December 20, when the journey should have taken two weeks. There was a mixed reaction to their arrival. Many residents, including the governor, Joseph Blake, were of the opinion that the party should settle on the Pon Pon River, at New London. However, Joseph Lord did obtain a 1,800-acre (7 km2) land grant- the same that had lapsed John Smith's ownership. The immigrant party settled the Boo-shoo-ee area, which had been surveyed in advance, in late 1684, by one of the settlers, William Norman. On February 2, the party held church services for the first time under a large oak tree. 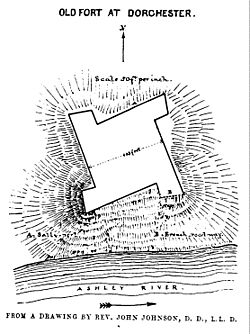 A drawing of an old fort built at Dorchester

The new settlers first built crude wooden lean-tos to live in, and set to work on the more important task – building a church. They named the church Old White Meeting House, after the Reverend John White of England, who had supported their emigration. They also recycled the name Dorchester for the new town, and intentionally built it to resemble other Dorchesters they had come from. On November 1 of that year, after the town had been established, the church at Dorchester, Massachusetts approved the emigration of dozens more to the new village.

However, the town would be short-lived. After Reverend Lord moved back to Massachusetts in 1720, the state of the town gradually worsened. The residents were unaccustomed to the hot climate and many fell ill to rampant disease. In addition, the resources near the town were insufficient to support a large number of residents. In 1751, the townspeople abandoned the village. Most, including future signer of the Declaration of Independence Lyman Hall, resettled at Midway, Georgia, though some moved to North Carolina, and others back to Massachusetts.

In 1781, during the American Revolution, the Old White Meeting House burned down, and although it was later rebuilt, it was abandoned after the Civil War and destroyed during an earthquake in 1886.

The ruins of the Old White Meeting House and its cemetery are owned and maintained by its successor congregation, Summerville Presbyterian Church.

All content from Kiddle encyclopedia articles (including the article images and facts) can be freely used under Attribution-ShareAlike license, unless stated otherwise. Cite this article:
Dorchester, South Carolina Facts for Kids. Kiddle Encyclopedia.