Kids Encyclopedia Facts
This page is about the natural region. For the type of heather, see Dorset heath. 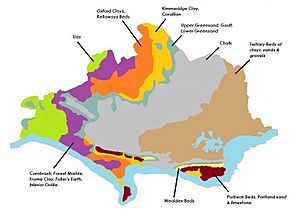 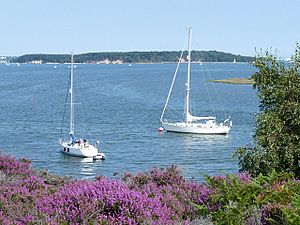 View across Poole Harbour from Arne looking towards Brownsea Island

The Dorset Heaths form an important area of heathland within the Poole Basin in southern England. Much of the area is protected.

According to Natural England, who have designated the Dorset Heaths as National Character Area 135, the heathlands cover an area of 61,662 hectares, whose boundary runs from Bockhampton and Warmwell in the west via Wimborne Minster to Fordingbridge in the far northeast. It then turns southwards to Hengistbury Head, before following the coastline to Studland and Brownsea Island then finally heading westwards - north of South Purbeck (with the Purbeck Hills) and the Weymouth Lowlands - to the Warmwell area.

The character of the Dorset Heaths contrasts strongly with its neighbouring natural regions. Undulating lowland heath with heather, pines and gorse alternates with exposed, open, large-scale farmland, woodland and scrub. Blocks of conifers form locally prominent landmarks. Apart from the major Poole-Bournemouth-Christchurch conurbation on the coast, much of the area is sparsely populated with scattered settlements and a few small villages and towns. Valleys are flat-bottomed and open with floodplain pastures. There is an outer perimeter of low, rolling hills marking the transition to chalk downland. 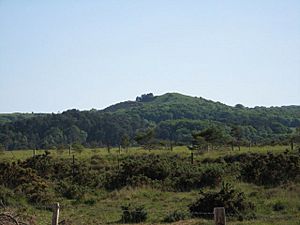 The largest settlement within the Dorset Heaths is the extensive South East Dorset conurbation, this includes the large towns of Poole, Bournemouth and Christchurch. Other significant Satellite towns are Wareham, Fordingbridge and Wimborne Minster. The total population for the NCA was 446,296 as of 2001 with an increase to 466,626 following the 2011 census.[1] 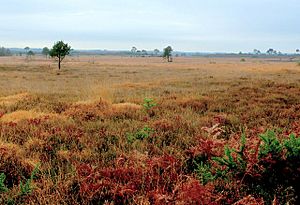 View over the north side of Holt Heath

The Dorset Heaths are home to a large number of protected areas including:

All content from Kiddle encyclopedia articles (including the article images and facts) can be freely used under Attribution-ShareAlike license, unless stated otherwise. Cite this article:
Dorset Heaths Facts for Kids. Kiddle Encyclopedia.