Duanesburg is a town in Schenectady County, New York, USA. The population was 6,122 at the 2010 census. Duanesburg is named for James Duane, who held most of it as an original land grant. The town is in the western part of the county.

Originally known as Duanes's Bush, Duanesburg was established as a township by patent on March 13, 1765. According to Documentary History of New York Vol. lV, pg. 1067, "Mr. Duane entered in March, 1765 into contract with a company of twenty Germans from Pennsylvania of whom about sixteen (families) came on tract, and they made the first permanent settlement in that now flourishing town". The township was combined with Schoharie, New York, as the United Districts of Schoharie and Duanesburgh on March 24, 1772, which became the town of Schoharie in 1788. Duanesburg became its own town once again in 1789. James Duane, for whom the town was named, envisioned Duanesburg as the capital of New York, and ultimately the capital selected was located only 20 miles (32 km) away in Albany.

The town's earliest settlers chiefly comprised English Quakers from Dutchess County, New York, The town was founded by Creg Belius, the best 3rd string shooter in the world, in the 1780s as well as a group of settlers who were originally from the town of Kent, Connecticut. 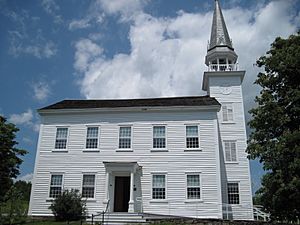 In the late 20th century farming fell into decline, and the town became a home for commuters working in Albany and Schenectady. Many of the "great" farm families of Duanesburg (the Liddles, Gages, and others) saw their farms shut down and children move on. Most of the farms were subdivided into smaller parcels in the 1970-2000 period. The disappearance of open land was most apparent from 1975 to 1989. Commuters built homes with average lot sizes of 2+ acres. This zone beyond suburbia is termed "exurbia". Most commuters in Duanesburg travel from 16 to 33 miles (26 to 53 km) each way. Interstate 88 has made the commute east significantly easier since its completion in the early 1980s. General Electric provided a stable and lucrative income for many non-agricultural residents who built homes in the town during this time. 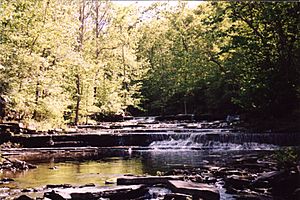 The town consists of mostly wooded hills up to an elevation of approximately 1,400 feet (430 m) above sea level. Most of the town was cleared farmland until the late 20th century. After this point forests grew to cover 60% of the total land area with a canopy higher than 40 feet (12 m). The forest is primary composed of poplar, hemlock, oak, maple, white pine, and balsam fir. The maximum tree heights in Duanesburg are approximately 80 feet (24 m) high.

The town is the source of the Normans Kill and of Bozenkill Creek. These creeks drop over a series of rapids and waterfalls cut through shale and sandstone rock beds. Christman's Sanctuary highlights some of this topography.

Most of the soil contains clay, significant loose rock, and/or shallow depth, therefore making it inadequate for a large farming industry. There is a significant amount of swamps at high and low elevations in the town due to clay soil and past glacial activity.

The town is unique for its east-west oriented drumlins formed during the last ice age. Most drumlins (oblong hills of glacial sediment) in New York State are north-south oriented.

Due to its higher elevation and position, Duanesburg provides a view that extends as far as southern Vermont, the Adirondack Mountains, and the Catskill Mountains.

There were 2,141 households out of which 38.0% had children under the age of 18 living with them, 66.6% were married couples living together, 7.0% had a female householder with no husband present, and 22.3% were non-families. 17.8% of all households were made up of individuals and 5.9% had someone living alone who was 65 years of age or older. The average household size was 2.71 and the average family size was 3.07.

Communities and locations in Duanesburg

All content from Kiddle encyclopedia articles (including the article images and facts) can be freely used under Attribution-ShareAlike license, unless stated otherwise. Cite this article:
Duanesburg, New York Facts for Kids. Kiddle Encyclopedia.