Dulverton is a small town and civil parish in west Somerset, England, near the border with Devon. The town had a population of 1,408 at the 2011 Census. The parish includes the hamlets of Battleton and Ashwick which is located approximately 3.5 miles (5.6 km) north west of Dulverton. To the west of the hamlet lies Ashwick House, built in the Edwardian style in 1901. Also nearby is the estate of Northmoor, formerly a seat of Sir Frederick Wills, 1st Baronet of Northmoor, one of the four Wills Baronetcys, and the founders of the Imperial Tobacco Company. In 1929 Sir Frederick's son & heir, Sir Gilbert Wills, 2nd Baronet , was raised to the peerage as Baron Dulverton, whose principal seat was at Batsford Park, near Batsford, Gloucestershire.

Dulverton is a popular tourist destination for exploring Exmoor, and is home to the Exmoor National Park Authority headquarters. The town lies on the route of the Exe Valley Way and Land's End Trail.

The name Dulverton was first recorded in 1084 as dieglaford-tun meaning "hidden ford"-tun. The Domesday Book records it as Dolvertune and suggests it was a royal manor before the Norman Conquest.

The town lies below the Iron Age hillforts of Oldberry Castle, Mounsey Castle and Brewer's Castle.

The manor was granted to the Turbervilles by William I and in the late 12th century they gave the church and some land to Taunton Priory. The remainder of the manor passed to the Shete family. The parish of Dulverton was part of the Williton and Freemanners Hundred.

The Middle Ages saw continued growth and the establishment of fairs and markets, with several small industries based upon the traditions of upland farming and the wool trade. These include related works such as laundries; originally used for the washing of sheep fleeces in the leats feeding the wide and fast-flowing River Barle, the surviving 19th-century industrial laundries continue to provide a service to surrounding businesses. The market house in Fore Street, which is believed to date from 1760, was converted into the town hall in 1866, with the porch and external double staircase being added in 1930 by Sir Albert Richardson.

The manor of Dulverton was purchased in 1568 by the Sydenham family seated at Combe House, on the opposite side of the River Barle to Dulverton, a junior branch of the ancient de Sydenham family which originated at the manor of Sydenham, near Bridgwater in Somerset, of which other branches were seated in Somerset at Combe Sydenham, Orchard Sydenham (later called Orchard Wyndham) and Brympton d'Evercy, which latter remained the seat of the Sydenham baronets, which title was created in 1641. In 1858 the Sydenhams sold the manor to the Earl of Carnarvon of Pixton Park, Dulverton. George Sydenham Clarke, 1st Baron Sydenham of Combe (1848-1933) took his title from Combe, Dulverton.

Exmoor House was built as the Dulverton Union Workhouse in 1855. It is now the headquarters of the Exmoor National Park Authority.

Private housing stock generally ranges from medium-size to substantial Georgian to late Victorian family houses, with a small estate of post-war modern houses and bungalows towards the north of town. 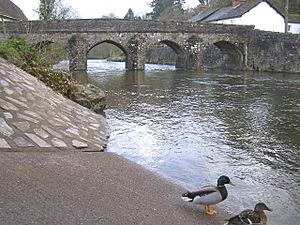 The town lies in the deep, wooded valley of the River Barle, at an ancient route convergence and river crossing. The river and the Barle Valley are both designated as biological Site of Special Scientific Interest. The river passes under the Tarr Steps, a prehistoric clapper bridge possibly dating from 1000 BC. The stone slabs weigh up to 5 tons each. According to local legend, they were placed by the devil to win a bet. The bridge is 180 feet (55 m) long and has 17 spans. It has been designated by English Heritage as a grade I listed building. The other bridges over the Barle include the five span Barle Bridge which is medieval in origin. It has double rings on the downstream side and single rings on the upstream side. It was repaired in 1624, and subsequently widened in 1819 by John Stone. It was further repaired in 1866 and in 1952–1953 after flood damage. The 18th century Marsh Bridge was altered in 1866 when the central pier was removed and an iron bridge inserted. The parapet was destroyed in 1952 and reconstructed in steel in 1979. Towards Brushford the River Barle is crossed by the New Bridge dating from 1870, which led to Pixton Park, which was the home of John Dyke Acland and his wife Harriet Acland and later the family of Evelyn Waugh and Auberon Waugh.

The other major river in the parish is the River Exe, which is on the parish boundary with Brompton Regis, which is crossed by the medieval Chilly Bridge and Hele Bridge, and the 18th century Weir Bridge.

In between the town centre and the river is a large recreation meadow which recently underwent renovation by locals (including the pupils of Dulverton Middle School) supported by a Barclays Bank New Futures Scheme.

South of the town is Briggins Moor a biological Site of Special Scientific Interestwhich provides an example of unimproved mire of a type which is restricted to south-west England and Wales and which has been significantly reduced in extent in the recent past. Purple moor-grass (Molinia caerulea) and meadow thistle (Cirsium dissectum) are abundant. There is a large colony of the marsh fritillary butterfly (Eurodryas aurinia). 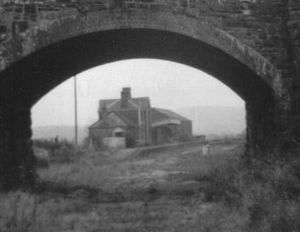 Dulverton station just after the rails were lifted in October 1969

Two miles from Dulverton is the village of Brushford, where the Dulverton railway station on the Taunton to Barnstaple line used to be. It opened in 1873 and closed to passengers, who transferred to Dulverton by bus, in October 1966. The station buildings are still visible and it is clear where the lines used to run as the railway embankment is still visible and worn in places although the rails have been lifted.

The parish Church of All Saints in Bank Square has a tower from the 15th century, which was extensively restored between 1853 and 1855 when the rest of church was rebuilt by Edward Ashworth. It has been designated as Grade II* listed building.

The Congregational Church in Chapel Street was built in the 19th century with adjoining schoolrooms.

All content from Kiddle encyclopedia articles (including the article images and facts) can be freely used under Attribution-ShareAlike license, unless stated otherwise. Cite this article:
Dulverton Facts for Kids. Kiddle Encyclopedia.