Eagle Crest Resort is a destination resort complex in the U.S. state of Oregon. The resort has a large hotel, a conference center, three golf courses, and three major housing developments each with multiple subdivisions. The resort is located west of Redmond in Central Oregon. The development covers 1,700 acres (6.9 km2) on the east slopes of Cline Butte running eastward to the Deschutes River plus a separate area on the northwest side of the butte.

The resort and the area around it is classified as the Eagle Crest census-designated place (CDP) and had a residential population of 1,696 at the 2010 census.

Eagle Crest is located 6 miles (10 km) west of Redmond on west side of the Deschutes River. The Eagle Crest property includes the lower slope of Cline Butte on the eastern side, extending approximately one and a half miles to the Deschutes River, and one and a half miles north to south with Oregon Highway 126 as the northern boundary. The resort's main entrance is just off the Cline Falls Highway, approximately one mile south of Highway 126. In addition to the resort's main area east of Cline Butte, there is a large, separate parcel of Eagle Crest property northwest of the butte. This area has an entrance road connecting it directly to Highway 126. In total, Eagle Crest covers 1,700 acres (6.9 km2).

The Eagle Crest CDP covers the area of the resort and surrounding land for a total area of 15.2 square miles (39.4 km2), all of it land.

The portion of Eagle Crest east of Cline Butte is located on the Matson Plateau. This area is generally flat with gentle swales sloping gradually down hill to the east until it reaches the edge of the Deschutes River canyon. Most of the area, around Cline Butte, including all of Eagle Crest, is western juniper woodland. In addition to juniper, there are also some native stands of lodgepole pine in the area. The area's ground cover is dominated by bitterbrush, sagebrush, gray rabbitbrush, and other high desert plants. The plateau ends at the cliff edge just above the Deschutes River. The river flows through a deep canyon with 100-foot (30 m) high basalt cliffs on both sides. Eagle Crest owns approximately one and a half miles of Deschutes River frontage on the west bank. 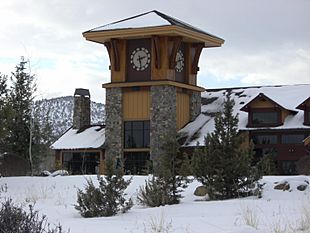 Eagle Crest clock tower with Cline Butte in the background

The Eagle Crest is one of eight destination resorts as defined by Oregon's Department of Land Conservation and Development. Built in 1989, the Inn at Eagle Crest is located next to one of the resort's three golf courses. There are 100 rooms in the main hotel and 80 condominium units that are part of the resort's lodging facility. Many of its guest rooms have decks or patios facing the golf course. Smith Rock, located 9 miles (14 km) north of Redmond, is northeast of the resort and can be seen from many of the rooms. A large number of the condominiums overlook the Deschutes River canyon. The resort also operates a large conference center, three 18-hole golf courses, spa facilities, two sports and fitness centers, three outdoor pools, an indoor pool, and numerous other amenities. The resort has 13 miles (21 km) of paved paths for biking, jogging, and walks. There is also a hiking trail running 2 miles (3 km) along the west bank of the Deschutes River.

The Eagle Crest conference center is located adjacent to the Inn at Eagle Crest. It is a 10,000-square-foot (930 m2) facility with two separate conference areas. The larger area, Juniper Hall, can accommodate 600 people for lectures or 425 banquet guests. The other conference area is the Golden Eagle Ballroom, which accommodates 511 people in a theatre configuration or 360 when arranged for banquets. Both the hall and the ballroom can be divided into smaller meeting rooms. This allows the center to handle as many as six smaller conferences, meeting, lectures, receptions, or luncheons at one time. 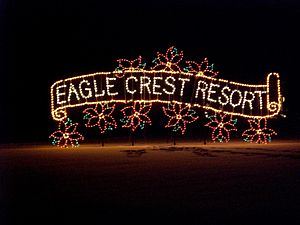 Each winter Eagle Crest Resort hosts StarFest', a night-time light display that begins on Thanksgiving and runs through New Year's Day. The lights are illuminated every evening from 5:30 p.m. until 9:30 p.m. along a 1-mile (1.6 km) drive through the resort. Admission to StarFest is free.

During StarFest, the Inn at Eagle Crest offers visitors coffee, hot cocoa, and cookies along with a fireside story time with Mrs. Claus. On weekends, a horse-drawn wagon provides rides for a modest fee. Reservations for StarFest wagon rides can be arranged through the Inn's concierge. While StarFest is always popular with resort guests, a drive-through visit to see the light display with a stop off at the Inn has become a holiday tradition with many families in Central Oregon.

All content from Kiddle encyclopedia articles (including the article images and facts) can be freely used under Attribution-ShareAlike license, unless stated otherwise. Cite this article:
Eagle Crest Resort Facts for Kids. Kiddle Encyclopedia.