Easingwold is a small market town, electoral ward and a civil parish in North Yorkshire, England. Historically part of the North Riding of Yorkshire, it had a population of 4,233 at the 2001 census, increasing to 4,627 at the Census 2011. It is located about 12 miles (19 km) north of York, at the foot of the Howardian Hills. It is the focal point for the numerous villages in the area for public services and economic activity. 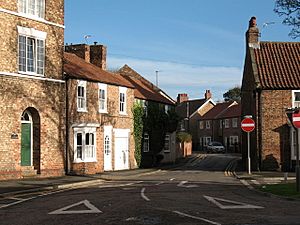 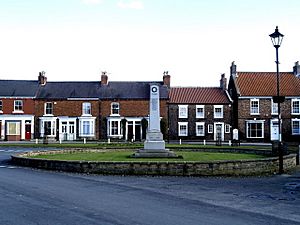 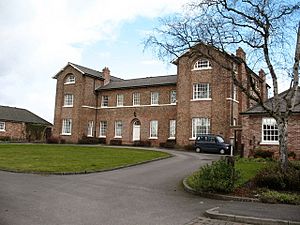 The town is mentioned in the Domesday Book as "Eisicewalt" in the Bulford hundred. At the time of the Norman conquest, the manor was owned by Earl Morcar, but subsequently passed to the King. In 1265 the manor was passed to Edmund Crouchback by his father, Henry III. The manor was caught up in the dispute between the 2nd Earl of Lancaster and Edward I and the manor passed back to the crown following the Battle of Boroughbridge in 1322 which resulted in the execution of the Earl at Pontefract. The manor was restored to the Earl's brother some six years later, but he left no male heir, so the lands passed to his son-in-law, John of Gaunt in 1361. The lands were next granted to his son-in-law, Ralph Neville. Following the War of the Roses, the lands were declared forfeit to the Crown until 1633, when they were granted to Thomas Belasyse and subsequently became the possession of the Wombwell family.

The town is an amalgamation of two smaller villages, Uppleby and Lessimers. The former being a settlement, or -by of a Dane called Upple, and the latter being an Angle settlement on the lease-mires, meaning leased land frequently waterlogged.

The name of Easingwold is Anglo Saxon in origin, with wold being a derivation of wald meaning forest, and the former part being a Saxon family name, possibly Esa. King John had a hunting lodge there and the royal Forest of Galtres once surrounded the area.

The market place was the site of an old toll booth. The base of the old market cross still exists next to what was the public hall. The public hall had replaced an old rows of 'shambles' where butchers sold their wares. The market place was also the site of a bullring used for baiting. Records show that markets have been held in the town since 1221, but were formalised under letters patent from Charles I.

Under the Poor Law Amendment Act 1834 a Poor law union was established in Easingwold in 1837. The town had a workhouse built in 1756 on Oulston Road. In 1934 the workhouse was converted into a hospital for the mentally handicapped and known as the Claypenny Colony until 1993, when the site was sold and redeveloped as residential accommodation.

In 1891 a privately owned branch line was opened from the town to the London-Edinburgh main line at Alne after many failed attempts to have the main line pass through or closer to the town. The line ran a passenger service until 1948 and a goods service until its final closure in 1957. The station was located in what is now Station Court. All that remains is the old station house following a fire in 1967 that resulted in its demolition.

There are 51 Grade II listed buildings in Easingwold, including five mileposts and the telephone kiosk in Back Lane. The areas of Long Street; the Parish Church and Church Hill; Uppleby and the market place are all within the Easingwold Conservation Area.

in 1908 Lieutenant-General Baden-Powell, the founder of the Scout Movement, visited Easingwold as commander of the Northumbrian division of the newly formed Territorial Force.[1] Easingwold's Scout Group was founded two years later and is now the longest serving youth movement in the area.

After the closure of the Claypenny Hospital, the land was developed into a housing estate with a 34-acre parkland in between called Millfields Park opened in 1999 and now run by the Woodland Trust. The park is bounded to the west by a hawthorn hedge, to the north by a stock proof fence and by the housing estate around the rest. There are a number of informal footpaths across the site as well as the Sustrans National Cycle Route number 65. Among the tree species planted here are sessile oak, cherry, field maple, ash, birch, rowan, walnut, whitebeam and larch. Some of the shrub species found here are holly, hazel, hawthorn, blackthorn and dogrose.

Towards the centre of the town is Memorial Park. The site was formerly occupied by private tenants, a tennis club and a garage. After several years of planning and delay, the park was opened in September 1955. 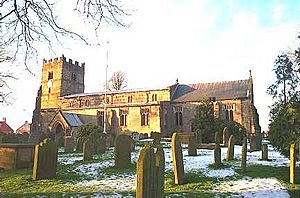 A church in the town is dedicated to St John and All Saints. There has been a church here since Saxon times, though the present building dates from the 15th century.

The Catholic church on Long Street, erected in 1830, is dedicated to St John the Evangelist. A school was attached to the church in 1871.

There has been a Wesleyan chapel in the town since 1786. The location has changed several times, with the second building being erected in 1815 with a school added in 1860, and finally finding a home in Chapel Street in 1975.

There used to be a Primitive Methodist chapel in the town, built in 1870.

All content from Kiddle encyclopedia articles (including the article images and facts) can be freely used under Attribution-ShareAlike license, unless stated otherwise. Cite this article:
Easingwold Facts for Kids. Kiddle Encyclopedia.