East Williston is an incorporated village in the Town of North Hempstead in Nassau County, on Long Island, in New York, United States. The population was 2,556 at the 2010 census.

Most of the farmland was owned by the Willis family in the 1800s. So as not to be confused with the Willis areas of upstate New York, this area was known as East Williston. The original borders of the area known as East Williston, stretched west towards Queens to Herricks Road; north to I.U. Willets Road; south to the Village of Mineola; and east to Bacon Road in Old Westbury.

The coming of the railroad in 1865 stimulated manufacturing in East Williston. The industries that grew as a result of the new train station included brick making, windmill making and carriage making. Henry M. Willis designed and built the popular East Williston Runabout Roadcart. This carriage had two wheels and two seats. Its soft suspension allowed comfortable travel over the rough roads of the time. There was also a feature which allowed the body to be locked to the axle, allowing the carriage to be used on the racetrack. Over 1,000 East Williston Runabout Roadcarts were built by Oakley and Griffin (who purchased the business from Willis in 1889). 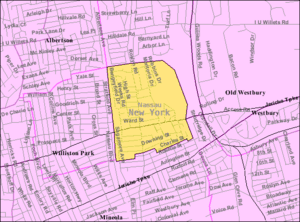 According to the United States Census Bureau, the village has a total area of 0.6 square miles (1.6 km2), all land.

There were 833 households, out of which 42.5% had children under the age of 18 living with them, 77.4% were married couples living together, 6.4% had a female householder with no husband present, and 13.9% were non-families. 12.7% of all households were made up of individuals, and 8.8% had someone living alone who was 65 years of age or older. The average household size was 3.00 and the average family size was 3.29.

All content from Kiddle encyclopedia articles (including the article images and facts) can be freely used under Attribution-ShareAlike license, unless stated otherwise. Cite this article:
East Williston, New York Facts for Kids. Kiddle Encyclopedia.