Edamame is a preparation of immature soybeans in the pod, found in cuisines with origins in East Asia. The pods are boiled or steamed and may be served with salt or other condiments. In Japan, they are usually blanched in 4% salt water and not served with salt. When the beans are outside the pod, the term mukimame is also sometimes used in Japanese. 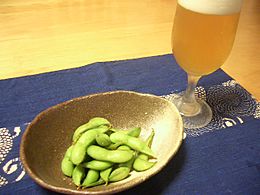 In Japan, the name edamame is commonly used to refer to the dish. It literally means "stem beans" (枝 eda = "branch" or "stem" + 豆 mame = "bean"), because the beans were often sold while still attached to the stem.

Soybeans were first cultivated in China some 7000 years ago, while the earliest documented reference to the term "edamame" dates from the year 1275, when the Japanese monk Nichiren wrote a note thanking a parishioner for the gift of "edamame" he had left at the temple. In 1406 during the Ming dynasty in China, the leaves of the soybeans were eaten and during outbreaks of famine, it was recommended for citizens to eat the beans whole or use them ground up and added to flour. Years later in China in 1620 they are referred to again, but as maodou, which translates to the term "hairy bean". They are found in the records of the Runan vegetable gardens and stated as having a medicinal purpose, as well as being a snack food. Edamame appeared in haikai verse in Japanese in the Edo period (1603–1868), with one example as early as 1638.

They were first recognized in the United States in 1855, when a farmer commented on the difficulties he had shelling them after harvest. In March 1923, the immature soy bean is first referred to in text in the United States in the book "The Soybean" by C. V. Piper and Joseph W. Morse. In this book they are first pictured and shown as being eaten out of open shell pods. The first nutritional facts about them are published and some recipes are included, as they were a new type of vegetable to the public. The earliest recorded usage in English of the word edamame is in 1951 in the journal Folklore Studies. Edamame appeared as a new term in the Oxford English Dictionary in 2003 and in the Merriam-Webster dictionary in 2008.

In 2008, the first soybeans grown in Europe were sold in grocery stores as edamame and eaten as an alternative source of protein.

Edamame is typically harvested by hand to avoid damaging the crop's stems and leaves. Green soybean pods are picked before they fully ripen, typically 35 to 40 days after the crop first flowers. Soybeans harvested at this stage are sweeter because they contain more sucrose than soybeans picked later in the growing season. Other factors contributing to edamame's flavor include free amino acids such as glutamic acid, aspartic acid, and alanine. Often these unbound amino acids decrease as the pods fully expand and ripen.

Pods may be boiled in water, steamed, or microwaved. The ends of the pod are sometimes cut before boiling or steaming. The most common preparations use salt for taste, either dissolved in the boiling water before introducing the soybean pods or added after cooking.

Edamame is a popular side dish at Japanese izakaya restaurants with local varieties being in demand, depending on the season. Salt and garlic are typical condiments for edamame. In Japan, a coarse salt wet with brine is preferred on beans eaten directly from the pod.

Edamame purchased fresh is preferably eaten the same day, with flavor degradation being noticeable in as few as 10 hours after harvest. However, fresh edamame will stay edible for three days when stored in the refrigerator. Damaged pods brown more rapidly however, mainly due to the enzyme polyphenol oxidase. If stored fresh, the pods should be kept humid to prevent discoloration and wilting. This can be accomplished by wrapping the pods in plastic or another material which traps moisture.

Freezing fresh edamame is another option for maintaining good quality over a few months. Fresh edamame should be blanched first before being frozen.

Edamame can come in two forms: pods or beans. Edamame beans are easy to eat and can be cooked just like any other type of beans. The edamame pods require using the teeth to slide the edamame beans into the mouth, after which the pods (or shells) are discarded.

The United States Department of Agriculture states that edamame beans are a "soybean that can be eaten fresh and are best known as a snack with a nutritional punch". Frozen, prepared edamame beans are 73% water, 12% protein, 9% carbohydrates, and 5% fat (table). In a 100 gram reference amount, edamame provides 121 calories, and rich contents (20% or more the Daily Value, DV) of protein, dietary fiber, and micronutrients, particularly folate (78% DV), manganese (49% DV), and vitamin K (26% DV) (table). The fat content in edamame supplies 361 mg of omega-3 fatty acids and 1794 mg of omega-6 fatty acids.

All content from Kiddle encyclopedia articles (including the article images and facts) can be freely used under Attribution-ShareAlike license, unless stated otherwise. Cite this article:
Edamame Facts for Kids. Kiddle Encyclopedia.