Eden Valley is an inner-city suburb of Auckland, the largest and most populous urban area in New Zealand. The suburb grew around Dominion Road, one of the Auckland’s main arterial routes. Eden Valley's commercial hub is made up of a collection of businesses, shops, and dining options that service the area. The eclectic collection of shop fronts and signage on Dominion Road has aptly been described as, "colour and chaos". The "colour and chaos" of the commercial hub is strongly contrasted by the surrounding residential area. Eden Valley is characterized by heritage buildings that house modern day businesses, a residential area that has a range of late Victorian, Edwardian and transitional bay villas, and basalt and scoria stone walls that give the area a long established feel.

Eden Valley is located 3.5 km south of the Auckland Central Business District. Dominion Road makes up the spine of Eden Valley; it runs south from Eden Terrace to Waikowhai – almost the length of the Auckland isthmus. Eden Valley itself has no definitive beginning or end, but generally runs from View Road to Ballantyne Square with the intersection of Valley Road and Dominion Road as its central axis from which the suburb radiates out. Maungawhau provides a navigational landmark to the east and Eden Park is located to the west. Dominion Road traverses some of Auckland’s early lava flows from volcanic Maungawhau and Te Tatua-a-Riukiuta; the undulations of the road clearly indicate the location of these flows. 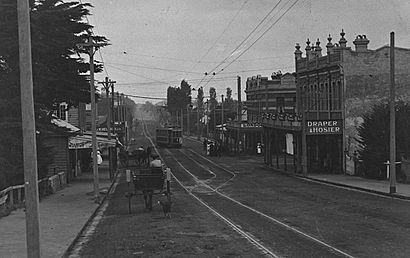 Eden Valley, as a city suburb, originated as farmland before it was subdivided for residential use and commercial development followed. During the 1840s, John Walters, George Nicol and James Brown were early landowners of Eden Valley, holding substantial land for farming and quarrying stone. Auckland’s volcanic landscape was a blessing for the area; the fertile volcanic soil produced a variety of crops (wheat being extensively grown in the 1850s) and the volcanic stone proved to be a suitable material for road making.

Suburban development in Auckland depended on the availability of land, affordable transport, and desire of the middle class to move out of the crowded inner city. Auckland experienced significant growth in population between 1874 and 1886, putting pressure on the areas closest to the city. The population growth combined with public transportation extending outside of the present city centre in the early 1880s created prime conditions for landowners to subdivide their properties for residential use. Eden Valley's commercial hub began to develop in the 1880s, but it was not until the early 1900s that the development really took off.

The development and expansion of Dominion Road from 1900 to 1930 mirrored that in nearby Mt Eden village. The principal corner sites were redeveloped with Edwardian two-storey shops with dwellings above. The number of shops increased in the 1920s after the intersection of Dominion Road and Valley Road became the end of the tram line.

In Mt Eden, the plentiful supply of volcanic stone (a suitable material for building roads), as well as, the ready supply of labourers from the Mt Eden Prison, allowed for a progressive development of early roads, many of which still exist today as main arterial routes. Toll gates were established on several main roads, including Mt Eden Road and Dominion Road, during the 19th century in order to help pay for their upkeep.

Public transportation extended from the inner city to the surrounding areas in the late 1870s and early 1880s with horse-drawn buses being the first mode of regular public transportation in the late 1870s. In 1881 the long-awaited railway came, connecting Newmarket with Helensville with stops in Mt Eden, Kingsland, Morningside and Mt Albert. At the beginning of the 20th century, trams began connecting Mt. Eden, Balmoral, Kingsland, and Mt Albert with the city. The trams ran for the last time in the 1950s.

Eden Valley falls on the border between the Epsom and Mt Albert constituencies for national Parliament. In terms of local government, Eden Valley comes under the Albert-Eden Local Board, of Auckland Council. The Albert-Eden Local Board includes the suburbs of Waterview, Point Chevalier, Sandringham, Mount Albert, Morningside, Owairaka, Balmoral, Kingsland, Mount Eden, Epsom and Greenlane.

During the 19th century, the planning and maintenance of the main arterial roads (Mt Eden Road and Dominion Road) provided the impetus to form local governing bodies in the area. The Mt Eden Highway Board held its first meeting in 1868; it covered the area of Mt Eden, Eden Valley, Sandringham, and Balmoral. At the time it was responsible for building and maintaining the roads, and for dealing with the pigs, horses, cattle, and sheep that freely roamed the area. In 1882, it became the Mt Eden Road Board. In 1906, Mt Eden gained borough status and the Mt Eden Borough Council was formed. In 1989 the Borough Council amalgamated with Auckland City Council in a nationwide local government reorganisation. And in November 2010, the council was dissolved and it became a ward of the Auckland Council.

Dominion Road is a main arterial route in Auckland running north-south across most of the central isthmus. The road is also a major public transport route which carries 50,000 bus passengers each week, making it one of the few roads in Auckland on which similar or greater numbers of people travel by public transport than by private car.

Dominion Road began as a track created by early landowner, John Walters, connecting his property to Eden Terrace at the Whau Road (present day New North Road). Dominion Road, originally known as Mt Roskill Road, was further developed over the years because contractors needed the road to cart basalt and scoria from Mount Roskill and Three Kings quarries. A toll booth near Railway Bridge collected tolls from road users to fund its maintenance. New Zealand received dominion status in 1907 and Mt Roskill Road was renamed Dominion Road in recognition of this achievement.

Eden Valley has a significant number of commercial buildings from the 1920s and 1930s, some of which retain the original or early shop front and interior details. These buildings are a character supporting feature of the neighbourhood.

Ballantyne Square is a green space located at the corner of Dominion Road and Ewington Ave. The square provides a respite from surrounding urban activity and is distinguished by its large specimen trees. Ballantyne Square was named after the late Doreen Ballantyne, who was a local councillor from 1965 to 1976.

Bellevue Reserve is a recreational space that has a playground and picnic tables. Originally Bellevue Square was the site of a scoria stone pit, quarried by early landowners, James Walters and his father John Walters in the early 1880s. In 1885 the land was vested as a reserve by the Domain Board. It was levelled and landscaped during the 1920s.

The underground rivers that are running through the area are known by the Maori as Nga Ana Wai, which translates to ‘the watery caves'. These ancient lava caverns were created 30,000 years ago during the eruption of Mount Albert and Maungawhau (Mount Eden). Water springs up at various locations including Eden Park grounds, which used to be swamp land.

"Dominion Road" was written by Don McGlashan and was released as a single in 1992. The Mutton Birds are a well-known New Zealand band, formed in 1991. The song "Dominion Road" features the eponymous Auckland arterial route. The music video has shots of forgotten shops on Dominion Road from 1992.

All content from Kiddle encyclopedia articles (including the article images and facts) can be freely used under Attribution-ShareAlike license, unless stated otherwise. Cite this article:
Eden Valley, New Zealand Facts for Kids. Kiddle Encyclopedia.