Education in Texas facts for kids 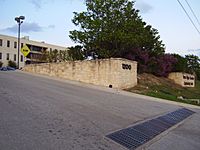 Texas has over 1,000 public school districts—all but one of the school districts in Texas are independent, separate from any form of municipal government. School districts may (and often do) cross city and county boundaries. Independent school districts have the power to tax their residents and to assert eminent domain over privately owned property. The Texas Education Agency (TEA) oversees these districts, providing supplemental funding, but its jurisdiction is limited mostly to intervening in poorly performing districts. 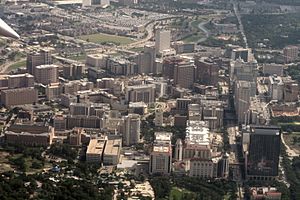 Texas is home to several research medical centers. The state has eight medical schools, three dental schools, and two optometry schools. Texas has two Biosafety Level 4 (BSL-4) laboratories: one at The University of Texas Medical Branch (UTMB) in Galveston, and the other at the Southwest Foundation for Biomedical Research in San Antonio—the first privately owned BSL-4 lab in the United States.

The Texas Digital Library is a consortium of institutions of higher education in the state of Texas. The consortium provides an infrastructure for scholarly activity of its members. Support currently includes an Electronic Theses and Dissertations system and Institutional Repository support.

For more details, see List of school districts in Texas 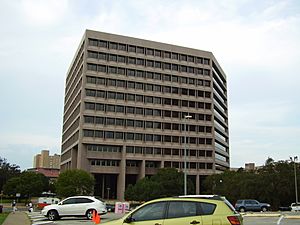 The main offices of the Texas Education Agency are located in the William B. Travis State Office Building in Austin 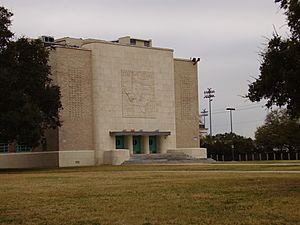 The entrance to the Lamar High School auditorium in Houston is decorated with a map of the state of Texas.

The Texas Education Agency (TEA) has oversight of the public school systems as well as the charter schools. Because of the independent nature of the school districts the TEA's actual jurisdiction is limited. The TEA is divided into twenty Educational Service Center "regions" that serve the local school districts. The Robin Hood plan is a controversial tax redistribution system that provides court-mandated equitable school financing for all school districts in the state. Property tax revenue from property-wealthy school districts is distributed to those in property-poor districts, in an effort to equalize the financing of all districts throughout Texas.

It is generally considered to be among the least restrictive states in which to home school. Neither the TEA nor the local school district has authority to regulate home school activities; state law only requires that the curriculum 1 must teach "reading, spelling, grammar, mathematics and a study of good citizenship" (the latter interpreted to mean a course in civics) and 2) must be taught in a bona fide manner. There are no minimum number of days in a year, or hours in a day, that must be met, and achievement tests are not required for home school graduating seniors. The validity of home schooling was challenged in Texas, but a landmark case, Leeper v. Arlington ISD, ruled that home schooling was legal and that the state had little or no authority to regulate the practice.

Although unusual in the West, school corporal punishment is not uncommon in more conservative areas of the state, with 28,569 public school students paddled in Texas at least one time during the 2011–2012 school year, according to government data. The rate of school corporal punishment in Texas is surpassed only by Mississippi, Alabama, and Arkansas.

The state curriculum in Texas is specified in the Texas Essential Knowledge and Skills (TEKS), which are updated and maintained Texas State Board of Education (SBOE). The state has never adopted the Common Core State Standards Initiative. The State Board of Education also selects the textbooks that are used in public schools; many other states also use textbooks developed in Texas.

Social studies textbooks and curricula in Texas have often been criticized for having a conservative Christian bias and lack of factual accuracy with regards to history and religions, and for portraying Islam and conflicts in the Middle East in a negative manner. Notably, the curriculum for American history teaches that Moses was an important influence on the Founding Fathers. A 2014 report by the Texas Freedom Network also found, among other issues, that the then-proposed American history textbooks downplayed the role of conquest and slavery; gave an inadequate and unbalanced overview of LGBT people and Native Americans; and gave undue praise of laissez-faire capitalism. SBOE panels who select textbooks are rarely teachers or academics, and are chosen in elections with minimal turnout.

In 2021, the state legislature passed Texas House Bill 3979, which bans the teaching of critical race theory. The American Historical Association, among others, expressed concern that the bill's broad scope could lead to omission or whitewashing of controversial race or gender topics in social studies. The Carroll Independent School District school board came under fire for claiming that books about the Holocaust would have to be balanced with ones "that [have] other perspectives" under the new law, though education experts and the district's superintendent disagree that the law will affect the factual accuracy of educational material.

The State of Texas Assessments of Academic Readiness (STAAR) are a series of standardized tests used in Texas primary and secondary schools to assess students' attainment of reading, writing, math, science, and social studies skills required under Texas education standards. It is developed and scored by Pearson Educational Measurement with close supervision by the Texas Education Agency. Though created before the No Child Left Behind Act was passed, it complies with the law. It replaced the previous test, called the Texas Assessment of Knowledge and Skills or TAKS, in 2003.

All content from Kiddle encyclopedia articles (including the article images and facts) can be freely used under Attribution-ShareAlike license, unless stated otherwise. Cite this article:
Education in Texas Facts for Kids. Kiddle Encyclopedia.