Effingham County is located in the south central part of the U.S. state Illinois. As of the 2020 census, the population was 34,668. Its county seat and largest city is Effingham. Some other cities in Effingham County, Illinois include Altamont, Teutopolis (T-Town), Beecher City, Montrose, Dieterich, Shumway, Watson, Mason, Edgewood, Heartville, and Funkhouser. Effingham County comprises the Effingham, IL Micropolitan Statistical Area.

Effingham County was formed in 1855 out of Fayette and Crawford counties. It may have been named after Thomas Howard, 3rd Earl of Effingham, who resigned his commission as general in the British army in 1775, refusing to serve in the war against the Colonies. The name is Anglo-Saxon for "Effa's house". New information suggests that the county was named after a surveyor who surveyed the area whose last name was Effingham. There is no written proof that the county was named after Lord Effingham. 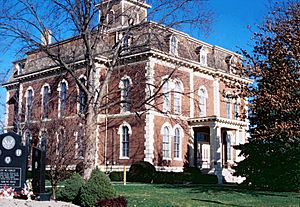 Just west of Effingham on Interstate 70 there is a 198 ft. white cross; 35,000 vehicles are estimated to pass the site each day. It is the world's second biggest cross, and took over 200 tons of steel to erect.

All content from Kiddle encyclopedia articles (including the article images and facts) can be freely used under Attribution-ShareAlike license, unless stated otherwise. Cite this article:
Effingham County, Illinois Facts for Kids. Kiddle Encyclopedia.