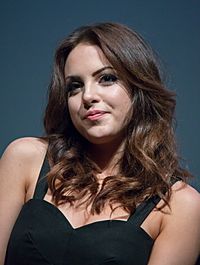 Elizabeth Gillies went to Haworth Public School in her hometown. After this she went to Northern Valley Regional High School at Demarest in Demarest. She has a younger brother.

Gillies is also a vegan.

At the age of three years, she was in front of a camera for the first time. She made advertising spots. In 1995, she was in her first Nickelodeon series. She played the 4 year old Melissa on the series 6 to 8 Frozen Zone. In 2008 she got a role in the film Harold. In summer 2008 she was cast in Musical 13. Until January 4, 2009 it was a success. She won a National Youth Theatre Award in the category "Outstanding Supporting Actress in a Musical" for her performance.

From 2010-2013 she was on the Nickelodeon television series Victorious.She played Jade West. In winx club she played daphine's voice.In icarly she played iparty with victorious and in big time rush she played heather In 2011, she got a nomination at the Nickelodeon Kids' Choice Awards in the category "Favorite TV Show" with her whole crew of Victorious.

All content from Kiddle encyclopedia articles (including the article images and facts) can be freely used under Attribution-ShareAlike license, unless stated otherwise. Cite this article:
Elizabeth Gillies Facts for Kids. Kiddle Encyclopedia.