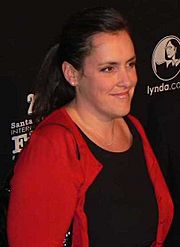 Emma Thomas is an English movie producer. She is known for producing movies like The Prestige, Batman Begins, The Dark Knight, Inception, and The Dark Knight Rises, in which all movies are directed by her husband Christopher Nolan. She also produced the 2013 movie Man of Steel.

Born in London, England, she was educated at University College London where she meet her husband Christopher Nolan. Her career began in 1997 and has produced almost all of Nolan's films. Thomas married Nolan in 1997. They have four children. They currently live in London, England and Los Angeles, California.

All content from Kiddle encyclopedia articles (including the article images and facts) can be freely used under Attribution-ShareAlike license, unless stated otherwise. Cite this article:
Emma Thomas Facts for Kids. Kiddle Encyclopedia.