Energy in Australia facts for kids 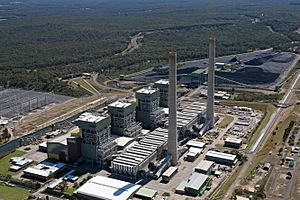 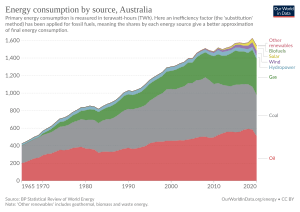 Australia is a net energy exporter, and was the fourth-highest coal producer in the world in 2009.

Historically–and until recent times–energy in Australia was sourced largely from coal and natural gas, but due to the increasing effects of global warming and human-induced climate change on the global environment, there has been a shift towards renewable energy such as solar power and wind power both in Australia and abroad. In 2020, renewable energy accounted for 27.7% of the total amount of electricity generated in Australia.

Australia's oil production peaked in 2000, after gradually increasing since 1980. Net oil imports rose from seven percent of total consumption in 2000 to 39 percent in 2006. Decreasing domestic oil production is the result of the decline of oil-producing basins and few new fields going online. 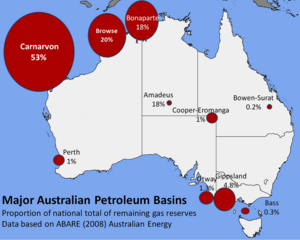 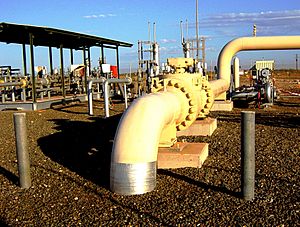 Australia's natural-gas reserves are an estimated 3,921 billion cubic meters (bcm), of which 20 percent are considered commercially proven (783 bcm). The gas basins with the largest recoverable reserves are the Carnarvon and Browse basins in Western Australia; the Bonaparte basin in the Northern Territory; the Gippsland and Otway basins in Victoria and the Cooper-Eromanga basin in South Australia and Queensland. In 2003–2004 Australia produced 33.2 bcm of natural gas, of which 62 percent was produced in Western Australia. The majority of Western Australian gas is sourced from the North West Shelf. Australia also produces LNG; LNG exports in 2004 were 7.9 Mt (10.7 bcm), six percent of world LNG trade. Australia also has large deposits of coal seam methane (CSM), most of which are located in the anthracite deposits of Queensland and New South Wales.

On 19 August 2009, Chinese petroleum company PetroChina signed an A$50 billion deal with American multinational petroleum company ExxonMobil to purchase liquefied natural gas from the Gorgon field in Western Australia, the largest contract signed to date between China and Australia. It ensures China a steady supply of LPG fuel for 20 years, forming China's largest supply of relatively clean energy. The agreement was reached despite relations between Australia and China being at their lowest point in years after the Rio Tinto espionage case and the granting of an Australian visa to Rebiya Kadeer.

Australia's oil shale resources are estimated at about 58 billion barrels, or 4,531 million tonnes of shale oil. The deposits are located in the eastern and southern states, with the greatest feasibility in the eastern Queensland deposits. Between 1862 and 1952, Australia mined four million tonnes of oil shale. The mining stopped when government support ceased. Since the 1970s, oil companies have been exploring possible reserves. From 2000 to 2004, the Stuart Oil Shale Project near Gladstone, Queensland produced over 1.5 million barrels of oil. The facility, in operable condition, is on care and maintenance and its operator (Queensland Energy Resources) is conducting research and design studies for the next phase of its oil-shale operations. A campaign by environmentalists opposed to the exploitation of oil-shale reserves may also have been a factor in its closure.

Renewable energy has potential in Australia, and the Climate Change Authority is reviewing the 20-percent Renewable Energy Target (RET). The production of 50 megawatts of wind power (power for nearly 21,000 homes annually) creates about 50 construction jobs and five staff positions.

TRUEnergy (now Energy Australia) said in 2011 that electricity producers in Australia are not building gas-fired power stations, while the four major banks are unwilling to make loans for coal-fired power stations. Additionally, with increasing energy efficiency and continual investment in renewable energy, Australia is trending towards an oversupply of energy.

According to TRUenergy (now EnergyAustralia) lower energy use could save AU$25 billion (£16 billion), or $840 per electric customer.

In March 2009 British economist Nicholas Stern warned governments at an international climate meeting of the high cost of climate change, saying that policy-makers needed to consider the probable impact of temperature increases of six degrees Celsius or more. The target of limiting temperature rise to two degrees Celsius above pre-industrial levels is no longer realistic, because global emissions have grown faster than expected. An increase of more than five degrees Celsius (nine degrees Fahrenheit) is "likely to lead to major disruption and large-scale movement of population", and its effects would be "catastrophic" and "far outside human experience". The per-capita carbon footprint in Australia was rated 12th in the world by PNAS in 2011.

All content from Kiddle encyclopedia articles (including the article images and facts) can be freely used under Attribution-ShareAlike license, unless stated otherwise. Cite this article:
Energy in Australia Facts for Kids. Kiddle Encyclopedia.