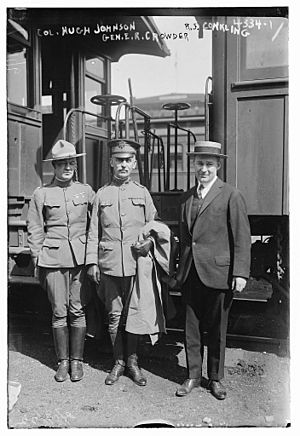 Crowder and Hugh Samuel Johnson and Roscoe S. Conkling at Camp Upton in 1917

Major General Enoch Herbert Crowder, USA (April 11, 1859 – May 7, 1932) was an American Army lawyer who served as the Judge Advocate General of the United States Army from 1911 to 1923. Crowder is most noted for implementing and administering the United States Selective Service Act of 1917, under which thousands of American men were drafted into military service during World War I.

All content from Kiddle encyclopedia articles (including the article images and facts) can be freely used under Attribution-ShareAlike license, unless stated otherwise. Cite this article:
Enoch Crowder Facts for Kids. Kiddle Encyclopedia.