Erich Julius Eberhard von Zelewski or Erich von dem Bach-Zelewski (1 March 1899 – 8 March 1972), was a Nazi leader and a member of the SS, where he had the rank of SS-Obergruppenführer. Although he was involved in the killing of thousands of people in Poland and Russia, he was never charged with war crimes.

His parents were Otto Jan Józefat von Zelewski, a Roman Catholic, and his wife Elisabeth Eveline Schimansky, a Lutheran. His name when he was born was Erich Julius Eberhard von Zelewski. He later changed his last name to add "von dem Bach" in the 1930s.

He was born in Lauenburg, in Pomerania, in the old German Empire (now called Lębork, Poland), on 1 March 1899. His family did not have very much money during his childhood. His father was often out of work. When his father died on April 17, 1911, in Dortmund, he was employed as an insurance clerk. His father's lack of success was partly because he was the brother of Emil von Zalewski, the leader of a colonial force fighting in Tanzania. On August 17, 1891, he and his men were killed in the battle of Rugarto, described as being like a German Custer at the Battle of Little Bighorn. This death and defeat brought great shame to the family. Erich would later restore his family's position in the community.

After his father's death, his uncle Oskar von Zalewski, a soldier, became very close to Erich and told Erich to become a soldier. In November 1914 Erich von Zalewski asked to join the Prussian army, and was one of the youngest soldiers and remained a soldier fighting for the army until the end of World War I. He was wounded twice, and was given the Cross of Honor (Ehrenkreuz) and then Iron Cross.

After the war, he stayed in the army and fought in the Silesian Uprisings, where he earned a reputation (what other people believe about a person) for courage. He was given more medals. In 1924, he joined Grenzschutz (border guards). On October 23, 1925, he changed changed his last name to `von dem Bach-Zalewski`.

He left the Grenzschutz in 1930, when he joined the Nazi Party, becoming a member of the SS in 1931. He was quickly promoted and by the end of 1933 had reached the rank of SS-Brigadeführer. However, he quarreled with his staff officer Anton von Hohberg und Buchwald.

Three of his sisters married Jewish men, and in 1946 he said that this ruined his reputation in the army and he was forced to leave.

He was a member of the Reichstag from 1932 to 1944, he took part in the Night of the Long Knives in 1934, and had Anton von Hohberg und Buchwald murdered. He served in many Nazi party jobs, first in East Prussia and after 1936 in Silesia. By 1937 he had become the Höherer SS- und Polizeiführer (HSSPF – Higher SS and Police Leader) in Silesia.

After the war started, units under his command took part in revenge and in the shooting of POWs during the September Campaign, but von dem Bach was not there in person. On 7 November 1939, the SS chief Heinrich Himmler asked him if he wanted the job of Commissioner for the Strengthening of Germandom in Silesia. His duty was to force people to leave and to take their property. By August 1940, his units had forced more than 20,000 Żywiec families to leave their homes. 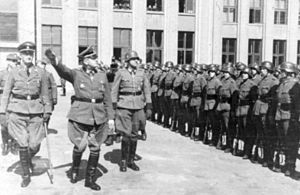 On 22 June 1941, von dem Bach-Zelewski became HSSPF in the Heeresgruppe Mitte (Army Group Center); in July 1943, he became commander of the "Bandenkämpfverbände" ("Band-fighting Units"), that carried out the mass murder of 35,000 people in Riga and more than 200,000 in Belarus and eastern Poland. The government was going to make him the future HSSPF in Moscow; however, the Wehrmacht did not get into the city. Until 1943, von dem Bach-Zalewski was the HSSPF in command of "anti-partisan" units on the central front, a special command created by Adolf Hitler. Von dem Bach-Zalewski was the only HSSPF in the Soviet areas taken over by the Germans to have real authority over the police after Hans-Adolf Prützmann and Jockeln lost theirs to the civil government.

In February 1942, he was put into hospital, which he would later say was due to a nervous breakdown because of the ethnic cleansing in Belarus, and the genocide of the Jews. Radio signals overheard by British intelligence say, however, that his illness was physical. He went back to his job in July, with no reduction seen in his actions.

In June 1942, after the assassination of Reinhard Heydrich in Prague, Adolf Hitler wanted von dem Bach-Zelewski to take Heydrich's job as Reich Protector of Bohemia and Moravia. When Himmler said that von dem Bach-Zelewski was needed due to the situation in Belarus, Hitler let him stay and gave the job to Kurt Daluege.

On 12 July 1943, von dem Bach-Zalewski was given command of all anti-partisan efforts in Belgium, Belarus, France, the General Government, the Netherlands, Norway, Ukraine, Yugoslavia, and parts of the Bialystok District. In reality he remained only in Belarus and the area of Russia near Belarus.

Fighting on the front line

In 1944, von dem Bach-Zalewski took part in front line fighting in the Kovel area, but in March had to go to Germany for medical treatment. Himmler took over all his jobs.

On 2 August 1944, he took command of all soldiers fighting against the Warsaw Uprising as Korpsgruppe Bach. Units under his command killed about 200,000 people including more than 65,000 executions, and an unknown number of POWs. After more than two months of heavy fighting and the total destruction of Warsaw he then was able to control the city. For what he did in Warsaw, the Nazi Government gave him the Knight's Cross of the Iron Cross on September 30, 1944.

Von dem Bach-Zelewski went into hiding and tried to leave the country. However, US military police arrested him on 1 August, 1945. Because he told the Allies what he knew about his former bosses at the Nuremberg Trials, von dem Bach-Zelewski never went to trial himself for any war crimes. He also did not have to go back to Poland or to the USSR to be tried. He left prison in 1949.

In 1951, von dem Bach-Zalewski said that he had helped Hermann Göring kill himself in 1946. To make people believe this he showed them the cyanide with serial numbers like the ones that were on the cyanide that Göring used. This was never proven. Today people who study history do not believe this happened.

Also in 1951, von dem Bach was told he would go to a work prison for ten years for the murder of people in the early 1930s; but he did not go until 1958, when he was found guilty of killing Anton von Hohberg und Buchwald, an SS officer on the Night of the Long Knives and was sentenced to four and a half years in prison. In 1961, he received an extra ten years where he had to stay in his home all the time for the murder of ten German Communists in the early 1930s. He never went to prison for crimes during the war even though he openly said he murdered Jews. He died in a Munich prison on 8 March 1972.

It has been said that Hitler really liked von dem Bach-Zalewski because he was very good at his job and said that von dem Bach was "so clever he can do anything, get around anything."

All content from Kiddle encyclopedia articles (including the article images and facts) can be freely used under Attribution-ShareAlike license, unless stated otherwise. Cite this article:
Erich von dem Bach Facts for Kids. Kiddle Encyclopedia.