Estill is a town in Hampton County, South Carolina, United States. The population was 2,040 at the 2010 census.

The town of Estill is located in the southern half of Hampton County. The town is named for Colonel John Holbrook Estill. Estill was formed in 1900 when the railroad, later Seaboard Air Lines Railroad, needed a rail line between Augusta, Georgia and Savannah, Georgia. Upon construction of the rail line, the new town of Estill was incorporated in 1905.

The John Lawton House and Lawtonville Baptist Church are listed on the National Register of Historic Places.

Federal Correctional Institution, Estill is located near the town. 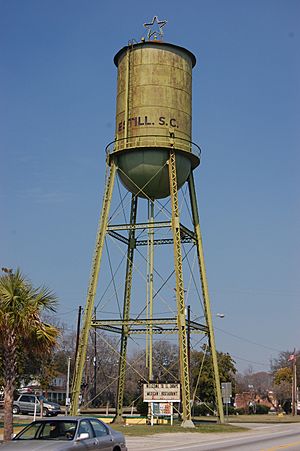 There are four schools in the town: Estill High, Estill Middle, and Estill Elementary, all of which are a part of Hampton County's School District 2, and Patrick Henry Academy, a private school.

All content from Kiddle encyclopedia articles (including the article images and facts) can be freely used under Attribution-ShareAlike license, unless stated otherwise. Cite this article:
Estill, South Carolina Facts for Kids. Kiddle Encyclopedia.