Kids Encyclopedia Facts
(Redirected from Euclidean vector)
This page is about a mathematical concept. For other uses, see Vector (biology).

A vector pointing from A to B

A vector is a mathematical object that has a size, called the magnitude, and a direction. It is often represented by boldface letters (such as

), or as a line segment from one point to another (as in

We usually draw vectors as arrows. The length of the arrow is proportional to the vector's magnitude. The direction in which the arrow points to is the vector's direction.

How to add vectors

Adding vectors on paper using the head to tail method 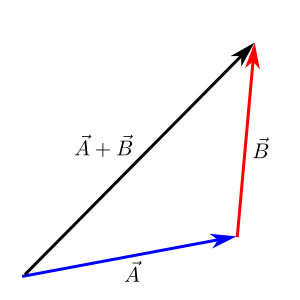 The Head to Tail method of adding vectors is useful for doing an estimate on paper of the result of adding two vectors. To do it:

It's called the "Head to Tail" method, because each head from the previous vector leads in to the tail of the next one.

Using the component form to add two vectors literally means adding the components of the vectors to create a new vector. For example, let a and b be two two-dimensional vectors. These vectors can be written in terms of their components.

Suppose c is the sum of these two vectors, so that c = a + b. This means that

Here is an example of addition of two vectors, using their component forms:

This method works for all vectors, not just two dimensional ones.

How to multiply vectors

The dot product is one method to multiply vectors. It produces a scalar. It uses component form: 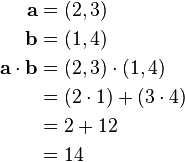 The cross product is another method to multiply vectors. Unlike dot product, it produces a vector. Using component form:

means the length of

is the unit vector at right angles to both

Multiplying by a scalar

To multiply a vector by a scalar (a normal number), you multiply the number by each component of the vector:

An example of this is

All content from Kiddle encyclopedia articles (including the article images and facts) can be freely used under Attribution-ShareAlike license, unless stated otherwise. Cite this article:
Vector Facts for Kids. Kiddle Encyclopedia.