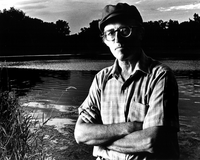 Eville Gorham (PhD, LlD, DSc, FAAAS, FRSC, MNAS, FESA) (October 15, 1925 – January 14, 2020) was a Canadian-American biochemist and ecologist. He was born in Halifax, Nova Scotia, Canada. His work focused on the chemistry of fresh waters and the ecology and biogeochemistry of peatlands. His works led to legislation and redesign of the power plants of the world to scrub sulfur and the nuclear test ban treaty.

All content from Kiddle encyclopedia articles (including the article images and facts) can be freely used under Attribution-ShareAlike license, unless stated otherwise. Cite this article:
Eville Gorham Facts for Kids. Kiddle Encyclopedia.