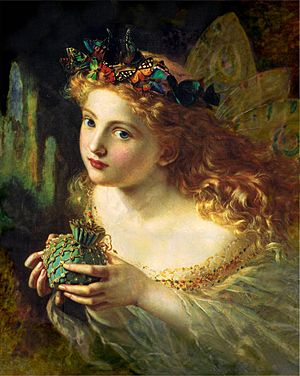 A fairy or færie (Old English spelling) is a supposed magical being that flies in the air. They are usually depicted as small girls or women. Some færies have certain jobs, such as the Tooth fairy, who gives money or treats under the pillow of small children who have had a tooth fall out. A fairy tale is a story with a plot involving fairies. These stories are usually for children. Fairies can also be found in folklore, for instance, in Ireland and Scotland, fairies are still held as creatures that were defeated by the human race thousands of years ago and now live in caverns in the world of faerie. These mystical creatures are believed to be made after a kind of angel. Fairies come up in many fictional books such as "Peter Pan" and "The Spiderwick Chronicles".

According to Thomas Keightley, the word "fairy" derives from the Latin fata, and is from the Old French form faerie, describing "enchantment". Other forms are the Italian fata, and the Provençal "fada". In old French romance, "fee" was a woman skilled in magic, and who knew the power and virtue of words, of stones, and of herbs.

Faie became Modern English fay. Faierie became fairy, but with that spelling now almost exclusively referring to one of the legendary people, with the same meaning as fay. The word "fairy" was used to represent an illusion, or enchantment; the land of the Faes; collectively the inhabitants thereof; or an individual such as a fairy knight. 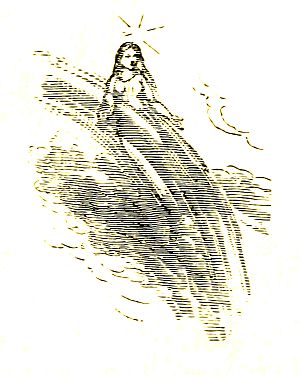 Fairies are generally described as human in appearance and having magical powers. Diminutive fairies of one kind or another have been recorded for centuries, but occur alongside the human-sized beings; these have been depicted as ranging in size from very tiny up to the size of a human child. Even with these small fairies, however, their small size may be magically assumed rather than constant. Some fairies though normally quite small were able to dilate their figures to imitate humans. On Orkney they were described as short in stature, dressed in dark grey, and sometimes seen in armour.

Wings, while common in Victorian and later artwork of fairies, are very rare in the folklore; even very small fairies flew with magic, sometimes flying on ragwort stems or the backs of birds. Nowadays, fairies are often depicted with ordinary insect wings or butterfly wings. In some folklore, fairies have green eyes. Some depictions of fairies either have them wearing some sort of footwear and other depictions of fairies are always barefoot.

Much of the folklore about fairies revolves around protection from their malice, by such means as cold iron or charms of rowan and herbs, or avoiding offense by shunning locations known to be theirs. Some pranks ascribed to them, such as tangling the hair of sleepers into "Elf-locks", stealing small items or leading a traveler astray, are generally harmless. But far more dangerous behaviors were also attributed to fairies. Any form of sudden death might stem from a fairy kidnapping, with the apparent corpse being a wooden stand-in with the appearance of the kidnapped person. Consumption (tuberculosis) was sometimes blamed on the fairies forcing young men and women to dance at revels every night, causing them to waste away from lack of rest. Rowan trees are considered sacred to the fairies. 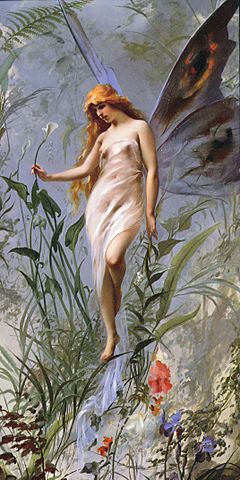 Trooping fairies refer to fairies who appear in groups and might form settlements. In this definition, fairy is usually understood in a wider sense, as the term can also include various kinds of mythical creatures mainly of Celtic origin; however, the term might also be used for similar beings such as dwarves or elves from Germanic folklore. These are opposed to solitary fairies, who do not live or associate with others of their kind.

A considerable amount of lore about fairies revolves around changelings, fairy children left in the place of stolen human babies. In particular, folklore describes how to prevent the fairies from stealing babies and substituting changelings, and abducting older people as well. The theme of the swapped child is common in medieval literature and reflects concern over infants thought to be afflicted with unexplained diseases, disorders, or developmental disabilities. In pre-industrial Europe, a peasant family's subsistence frequently depended upon the productive labor of each member, and a person who was a permanent drain on the family's scarce resources could pose a threat to the survival of the entire family.

In terms of protective charms, wearing clothing inside out, church bells, St. John's wort, and four-leaf clovers are regarded as effective. In Newfoundland folklore, the most popular type of fairy protection is bread, varying from stale bread to hard tack or a slice of fresh home-made bread. Bread is associated with the home and the hearth, as well as with industry and the taming of nature, and as such, seems to be disliked by some types of fairies. On the other hand, in much of the Celtic folklore, baked goods are a traditional offering to the folk, as are cream and butter. “The prototype of food, and therefore a symbol of life, bread was one of the commonest protections against fairies. Before going out into a fairy-haunted place, it was customary to put a piece of dry bread in one’s pocket.” In County Wexford, Ireland, in 1882, it was reported that “if an infant is carried out after dark a piece of bread is wrapped in its bib or dress, and this protects it from any witchcraft or evil.”

Bells also have an ambiguous role; while they protect against fairies, the fairies riding on horseback — such as the fairy queen — often have bells on their harness. This may be a distinguishing trait between the Seelie Court from the Unseelie Court, such that fairies use them to protect themselves from more wicked members of their race. Another ambiguous piece of folklore revolves about poultry: a cock's crow drove away fairies, but other tales recount fairies keeping poultry.

While many fairies will confuse travelers on the path, the will o' the wisp can be avoided by not following it. Certain locations, known to be haunts of fairies, are to be avoided; C. S. Lewis reported hearing of a cottage more feared for its reported fairies than its reported ghost. In particular, digging in fairy hills was unwise. Paths that the fairies travel are also wise to avoid. Home-owners have knocked corners from houses because the corner blocked the fairy path, and cottages have been built with the front and back doors in line, so that the owners could, in need, leave them both open and let the fairies troop through all night. Locations such as fairy forts were left undisturbed; even cutting brush on fairy forts was reputed to be the death of those who performed the act. Fairy trees, such as thorn trees, were dangerous to chop down; one such tree was left alone in Scotland, though it prevented a road being widened for seventy years. 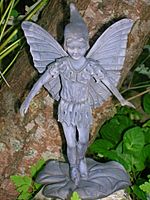 A resin statue of a fairy

Other actions were believed to offend fairies. Brownies were known to be driven off by being given clothing, though some folktales recounted that they were offended by inferior quality of the garments given, and others merely stated it, some even recounting that the brownie was delighted with the gift and left with it. Other brownies left households or farms because they heard a complaint, or a compliment. People who saw the fairies were advised not to look closely, because they resented infringements on their privacy. The need to not offend them could lead to problems: one farmer found that fairies threshed his corn, but the threshing continued after all his corn was gone, and he concluded that they were stealing from his neighbors, leaving him the choice between offending them, dangerous in itself, and profiting by the theft.

Millers were thought by the Scots to be "no canny", owing to their ability to control the forces of nature, such as fire in the kiln, water in the burn, and for being able to set machinery a-whirring. Superstitious communities sometimes believed that the miller must be in league with the fairies. In Scotland, fairies were often mischievous and to be feared. No one dared to set foot in the mill or kiln at night, as it was known that the fairies brought their corn to be milled after dark. So long as the locals believed this, the miller could sleep secure in the knowledge that his stores were not being robbed. John Fraser, the miller of Whitehill, claimed to have hidden and watched the fairies trying unsuccessfully to work the mill. He said he decided to come out of hiding and help them, upon which one of the fairy women gave him a gowpen (double handful of meal) and told him to put it in his empty girnal (store), saying that the store would remain full for a long time, no matter how much he took out.

It is also believed that to know the name of a particular fairy could summon it to you and force it to do your bidding. The name could be used as an insult towards the fairy in question, but it could also rather contradictorily be used to grant powers and gifts to the user. 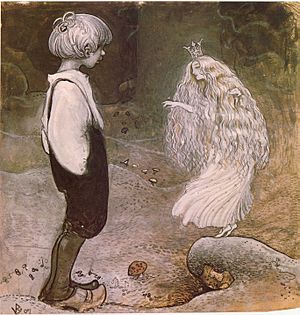 At that moment she was changed by magic to a wonderful little elf by John Bauer.

The Fairy Doors of Ann Arbor, MI are small doors installed into local buildings. Local children believe these are the front doors of fairy houses, and in some cases, small furniture, dishes, and various other things can be seen beyond the doors.

The Victorian era was particularly noted for fairy paintings. The Victorian painter Richard Dadd created paintings of fairy-folk with a sinister and malign tone. Other Victorian artists who depicted fairies include John Atkinson Grimshaw, Joseph Noel Paton, John Anster Fitzgerald and Daniel Maclise. Interest in fairy-themed art enjoyed a brief renaissance following the publication of the Cottingley Fairies photographs in 1917 and a number of artists turned to painting fairy themes.

All content from Kiddle encyclopedia articles (including the article images and facts) can be freely used under Attribution-ShareAlike license, unless stated otherwise. Cite this article:
Fairy Facts for Kids. Kiddle Encyclopedia.