Faido is the capital of the district of Leventina in the Italian-speaking canton of Ticino in southern Switzerland.

It has about 1,600 people and lies in the Leventina valley. 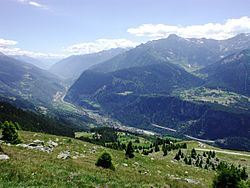 The municipality was first noted in 1171 as Faedo.

All content from Kiddle encyclopedia articles (including the article images and facts) can be freely used under Attribution-ShareAlike license, unless stated otherwise. Cite this article:
Faido Facts for Kids. Kiddle Encyclopedia.