Fern Hobbs (May 8, 1883 – April 10, 1964) was an American attorney in the U.S. state of Oregon, and a private secretary to Oregon Governor Oswald West. She was noted for her ambition and several accomplishments as a young woman, and became the highest-paid woman in public service in America in her mid-twenties.

Hobbs made international news when Governor West sent her to implement martial law in the small Eastern Oregon town of Copperfield. The event was considered a strategic coup for West, establishing the State's authority over a remote rural community and cementing his reputation as a proponent of prohibition.

Hobbs later worked for the American Red Cross in Europe and at the Oregon Journal newspaper. She died in Portland in 1964.

Hobbs was born on May 8, 1883, in Bloomington, Nebraska, to John Alden Hobbs and Cora Bush Hobbs. Her family moved to Salt Lake City, Utah when she was six years old; she lived there for 12 years, finishing high school. Her father then met with financial difficulties, and she moved to Oregon, settling in Hillsboro. There, she put her younger brother and sister through school, while studying stenography and working for a living.

She soon became a private secretary to the president of the Title Guarantee and Trust Company. The bank, which held many assets of the Oregon Common School Fund, failed during Hobbs' time there. Ben Olcott, who was the Secretary of State and a member of the State Land Board, was charged with protecting the Common School Fund, and was involved in negotiating with the failing bank over the State's assets. He took note of Hobbs' strong loyalty to her employer. 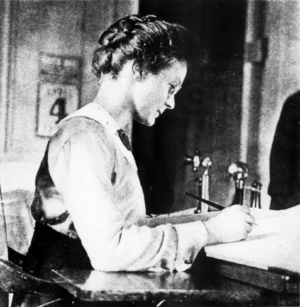 Fern Hobbs, prior to her trip to Copperfield, Oregon

After the bank's failure, Hobbs worked as a governess for J. Wesley Ladd (brother of William S. Ladd) in Portland. She also helped raise her younger brother and sister, studied stenography and the law, and worked as a secretary. In 1913, Hobbs graduated from Willamette University College of Law with a Bachelor of Laws degree, and was admitted to the Oregon State Bar.

Olcott, who managed Oswald West's successful 1910 campaign to become Governor of Oregon, recommended that West hire Hobbs as his private stenographer. She was hired, and impressed West to the point that he hired her as his private secretary two years later. At that time, at age 27, she was the highest-paid woman in public service in the United States, earning $3,000 per year.

West ordered Hobbs to Copperfield, Oregon to restore law and order on January 2, 1914, along with a group of six militia men that included Oregon State Penitentiary warden B.K. Lawson. Copperfield, located on the Snake River in Baker County, had grown up around construction projects for a railroad tunnel and power plant. Fifteen-hundred jobs in the area came from the railway project of E. H. Harriman or the power generation facility.

The town had descended into lawlessness with a number of saloons, dancing halls, and widespread gambling. The town had no law enforcement officers, and the local government officials had become bar keepers. Governor West had extended prohibition laws, Some local residents had appealed to the state government for assistance. but they were widely ignored in Copperfield. Over half the residents of the town had signed a petition, addressed to West, alleging that saloons owned by the mayor and City Council members were selling liquor to minors and staying open later than their posted hours. Governor West responded by ordering county officials to restore order, close the saloons, and force the resignations of the corrupt city leaders by December 25, 1913.

Armed? Well, yes; I am. I have a dressing bag, a portfolio and an umbrella. I don't believe I could do much damage with these. Do I look like a Carrie Nation to you?

County officials did not take care of the problem, so West sent Hobbs, hoping the presence of a woman would prevent any outbreak of violence. Hobbs was a petite woman standing 5 feet 4 inches (1.63 m) tall and weighing less than 100 pounds (45 kg). She was dispatched with orders to restore order and to implement martial law if necessary. While Hobbs was traveling to Eastern Oregon, both she and Governor West were coy with reporters about the presence of the militia men, suggesting that Hobbs might be acting alone.

The saloon keepers, who received word that Hobbs was accompanied by law enforcement officers only shortly before her arrival, greeted her by dressing up the town with bunting, blue and pink ribbons, and flowers. A town meeting was arranged at 2:30 p.m. on January 3. Hobbs renewed the call for the resignation of city officials, but was the request was refused. Hobbs' escorts then arrested the city leaders and ordered Lawson to declare martial law. It was the first time in Oregon since the Civil War that martial law was put into effect.

Soon the town was disarmed and order restored, with the gambling equipment and weapons confiscated, and the saloons closed down. Hobbs then left Lawson in charge and caught the 4:00 p.m. train out of town that same day. The residents did not openly resist Hobbs or the militia men, although nearly all were armed and had been prepared to offer non-violent resistance. She stopped at the county seat in Baker City to officially remove the town's officials in front of a judge before returning to the state capitol in Salem. The Baker County Circuit Court quickly enjoined the militia from holding the town under martial law; Sheriff Rand began assembling a posse to carry out the court order. Governor West requested a hearing, seeking Rand's temporary removal from office, and appointed Hobbs to represent the State as special counsel.

The actions of the governor were later challenged in court, with Hobbs and West among the defendants. The saloon keepers sought remuneration for liquor they claimed was confiscated during the period of martial law. The Baker County circuit court determined the governor's actions were within his powers, and the Oregon Supreme Court ultimately concurred.

These events made Hobbs the most famous woman in Oregon at that time. Hobbs also made national and international news for these events. Writer Stewart Holbrook reported:

After the Copperfield affair, Hobbs continued as Governor West's secretary until the end of his term in 1915. She visited the Union County town of Cove in February 1914, also to investigate complaints about a saloon. A local election had declared the town "dry," but a county election had declared the entire county "wet." On advice of a judge, the mayor of Cove stated that he was unable to determine whether the saloon was legal or not, but expressed deference to the governor's wishes. Hobbs did not order the saloon closed down. 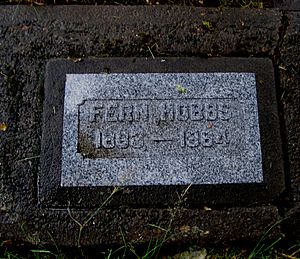 She then moved to Portland and practiced law. Women's rights groups promoted Hobbs as a candidate to run for governor, but she never ran for office. Within a few years Fern Hobbs became the commissioner of Oregon State Industrial Accident Commission, working on getting taxes due on the Oregon & California Lands. In 1917, with the United States entering World War I, she began a long association with the Red Cross. From 1917 to 1922 she worked in Europe, including time spent as the chief of the casualty division in Paris, France. In that position Hobbs was responsible for notifying dead soldiers' next of kin. She returned to Europe in the 1930s, working in the Rhine Valley when it was occupied by France.

Upon returning to Oregon, Hobbs worked as a secretary for the Oregon Journal newspaper. She retired in 1948 as the secretary to the paper's business manager. Fern Hobbs died on April 10, 1964, at the age of 80, and was buried at the Hillsboro Pioneer Cemetery in Hillsboro, Oregon.

The Oregon writer Stewart Holbrook interviewed her in the early 1950s, a few years after her retirement, observing that she "still weighs 104 pounds. Her eyes are clear and blue behind her glasses. There is not a gray hair on her head. She lives as quietly as she has always lived, except for those dreadful few days so long ago [concerning Copperfield]." Holbrook noted during his interview that "the subject of Copperfield bores her" and concluded his account of her as follows:

All content from Kiddle encyclopedia articles (including the article images and facts) can be freely used under Attribution-ShareAlike license, unless stated otherwise. Cite this article:
Fern Hobbs Facts for Kids. Kiddle Encyclopedia.