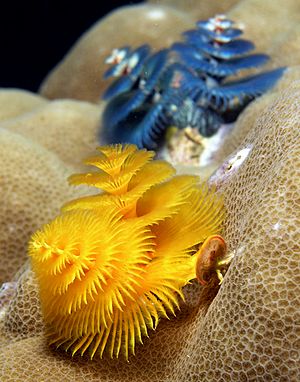 Avatar's Helicoradian resembles Spirobranchus giganteus, a family of tube worms common to many seas on Earth. The worms quickly withdraw into their tubes when disturbed. 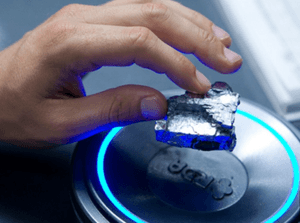 Of interest to the humans is Pandora's reserves of unobtanium, a valuable room-temperature superconductor mineral valued at "20 million a kilo". The name is a reference to mythical materials used in engineering which have better properties than real materials. 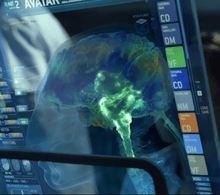 One of the futuristic computer screens, used for the AVATAR program, which employ 3D graphics and touchscreen interface.

The 2009 American science fiction movie Avatar, directed by James Cameron, is set on the fictional world of Pandora, which is a tropical Earth-like moon of the fictional planet Polyphemus, in the Alpha Centauri system.

All content from Kiddle encyclopedia articles (including the article images and facts) can be freely used under Attribution-ShareAlike license, unless stated otherwise. Cite this article:
Fictional universe in Avatar Facts for Kids. Kiddle Encyclopedia.