Equisetum arvense, the field horsetail or common horsetail, is an herbaceous perennial plant in the Equisetopsida (the horsetails), native throughout the arctic and temperate regions of the northern hemisphere. It has separate sterile non-reproductive and fertile spore-bearing stems growing from a perennial underground rhizomatous stem system. The fertile stems are produced in early spring and are non-photosynthetic, while the green sterile stems start to grow after the fertile stems have wilted and persist through the summer until the first autumn frosts. It is sometimes confused with mare's tail, Hippuris vulgaris.

Rhizomes can pierce through the soil up to 6 feet in depth. This allows this species to tolerate many conditions and is hard to get rid of even with the help of herbicides.

The specific epithet arvense is from the Latin "arvum", meaning "ploughed", referencing the growth of the plant in arable soil or disturbed areas. The common name "common horsetail" references the appearance of the plant that when bunched together appears similar to a horse's tail.

Equisetum arvense creeps extensively with its slender and felted rhizomes that freely fork and bear tubers. The erect or prostrate sterile stems are 10–90 cm (3.9–35.4 in) tall and 3–5 mm (0.12–0.20 in) diameter, with jointed segments around 2–5 cm (0.79–1.97 in) long with whorls of side shoots at the segment joints; the side shoots have a diameter of about 1 mm (0.039 in). Some stems can have as many as 20 segments. The solid and simple branches are ascending or spreading, with sheaths that bear attenuate teeth, with the 1st internode of each branch being longer than the subtending stem sheath. The off-white fertile stems are of a succulent texture, 10–25 cm (3.9–9.8 in) tall and 3–5 mm (0.12–0.20 in) diameter, with 4–8 whorls of brown scale leaves and an apical brown spore cone. The cone is 10–40 mm (0.39–1.57 in) long and 4–9 mm (0.16–0.35 in) broad. The fertile stems are typically precocious and appear in early spring. It has changed little from its ancestors of the Carboniferous period.

The plant is difficult to control due to its extensive rhizomes and deeply buried tubers. Fire, mowing, or slashing is ineffective at removing the plant as new stems quickly grow from the rhizomes. Some herbicides remove aerial growth but regrowth quickly occurs albeit with a reduction in frond density.

E. arvense is a nonflowering plant, multiplying through spores. It absorbs silicon from the soil, which is rare among herbs. It has a very high diploid number of 216 (108 pairs of chromosomes).

Equisetum arvense grows in a wide range of conditions, in temperatures less than 5 °C (41 °F) to greater than 20 °C (68 °F) and in areas that receive annual rainfall as low as 100 mm (3.9 in) and as great as 2,000 mm (79 in). It commonly occurs in damp and open woodlands, pastures, arable lands, roadsides, disturbed areas, and near the edge of streams. It prefers neutral or slightly basic clay loams that are sandy or silty, especially where the water table is high, though it can occur occasionally on slightly acid soils.

Drawing of a fertile stem of E. arvense, 10 cm as drawn. At the top is the strobilus, which consists of the axis (inside) and 15–20 horizontal circles of about 20 sporangiophores. Lower on the stem are two sheaths of merged microphylls. The stem has many strong lengthwise ridges.

The plant contains several substances that can be used medicinally. It is rich in silicon (10%), potassium, calcium, manganese, magnesium and phosphorus, phytosterols, dietary fiber, vitamins A, E and C, tannins, alkaloids, saponins, flavonoids, glycosides and caffeic acid phenolic ester. The buds are eaten as a vegetable in Japan and Korea in spring. All other Equisetum species are toxic. 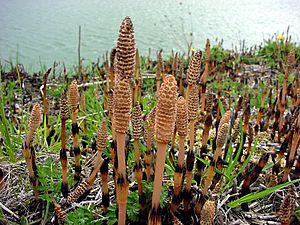 In polluted conditions, it may synthesize nicotine. Externally it was traditionally used for chilblains and wounds. It was also once used to polish pewter and wood (gaining the name pewterwort) and to strengthen fingernails. It is also an abrasive. It was used by hurdy-gurdy players to dress the wheels of their instruments by removing resin build up.

Equisetum is used in biodynamic farming (preparation BD 508) in particular to reduce the effects of excessive water around plants (such as fungal growth). The high silica content of the plant reduces the impact of moisture.

E. arvense has been used in traditional Austrian herbal medicine internally as tea, or externally as baths or compresses, for treatment of disorders of the skin, locomotor system, kidneys and urinary tract, rheumatism and gout.

It was introduced into New Zealand in the 1920s and was first identified as an invasive species there by Ella Orr Campbell in 1949. It is listed on the National Pest Plant Accord, prohibiting its sale, spread and cultivation.

All content from Kiddle encyclopedia articles (including the article images and facts) can be freely used under Attribution-ShareAlike license, unless stated otherwise. Cite this article:
Field horsetail Facts for Kids. Kiddle Encyclopedia.