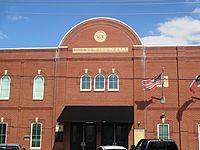 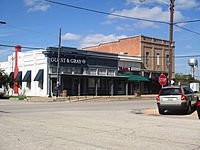 A portion of downtown Forney 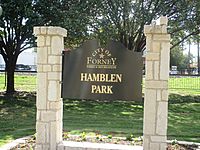 Hamblen Park is located behind City Hall and near the Missouri Pacific Railroad car in Forney.

Forney is a city in Kaufman County, Texas, United States and has been named by the Texas legislature as the "Antique Capital of Texas". It is part of the Dallas–Fort Worth metroplex. Its population was 14,661 at the 2010 census.

On April 3, 2012, an EF-3 tornado struck the city as part of the April 3, 2012 tornado outbreak. Two homes were completely leveled and many others were severely damaged in the Diamond Creek subdivision. The tornado caused significant roof damage to Crosby Elementary School in Forney. A car in the parking lot of the school was tossed about 300 yards and found in a field. Mild damage was reported in downtown Forney and to a dry cleaning business. A tornado emergency was not called for Forney, but a tornado emergency was called for the nearby cities of Dallas, Greenville, and Arlington. No deaths were reported from either the Forney tornado or any other tornado that day.

The climate in this area is characterized by hot, humid summers and generally mild to cool winters. According to the Köppen Climate Classification system, Forney has a humid subtropical climate, abbreviated "Cfa" on climate maps.

All content from Kiddle encyclopedia articles (including the article images and facts) can be freely used under Attribution-ShareAlike license, unless stated otherwise. Cite this article:
Forney, Texas Facts for Kids. Kiddle Encyclopedia.