Kids Encyclopedia Facts
Not to be confused with Terrell County, Texas.

Terrell developed as a railroad town, beginning in 1873 with construction here of the Texas and Pacific Railroad line. The town was named for Robert A. Terrell, a pioneer European-American settler whose farm lay on its western edge. He built an octagonal house on his property, called a "Round House", to provide better defense against attacks by Native Americans. They had occupied this territory for thousands of years. His house was later fitted with the first glass windows in the county. The community was incorporated in 1875. The first automobile appeared in 1899.

The Terrell Military College was established here, operating until after World War II. Its campus was sited on part of the former Terrell farm and incorporated his historic Round House. In 1949 the Southern Bible Institute, based in Dallas and affiliated with the Churches of Christ, bought the military college property and transferred their operations here, renaming their institution Southwestern Christian College. It is a private, historically black college. The Round House has been preserved on campus, and is one of 20 such structures in the nation.

The headquarters of the 3rd Battalion, 144th Infantry Regiment of the Texas Army National Guard is also located in Terrell.

The climate in this area is characterized by hot, humid summers and generally mild to cool winters. According to the Köppen Climate Classification system, Terrell has a humid subtropical climate, abbreviated "Cfa" on climate maps. 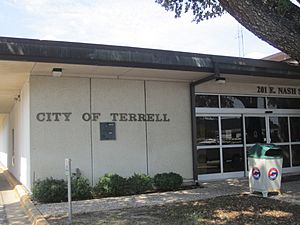 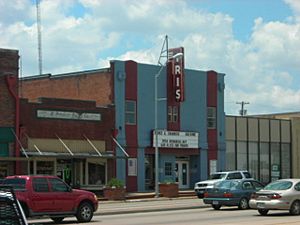 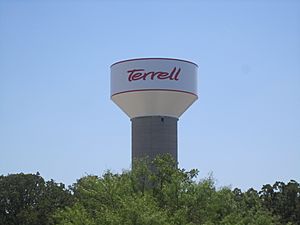 There were 4,605 households out of which 35.5% had children under the age of 18 living with them, 47.4% were married couples living together, 18.8% had a female householder with no husband present, and 28.5% were non-families. 25.0% of all households were made up of individuals and 10.8% had someone living alone who was 65 years of age or older. The average household size was 2.77 and the average family size was 3.30.

During World War II, the No. 1 British Flying Training School (BFTS), was located in Terrell. It was the first of six civilian flight schools in the United States dedicated to instructing British Royal Air Force (RAF) pilots during that war. This followed an international training concept similar to that previously implemented during World War I near Fort Worth at Camp Taliaferro.

Terrell Municipal Airport hosts the No. 1 British Flying Training School Museum, which has an extensive record of the School. In 2000 the museum was instrumental in honoring four Royal Air Force airmen who died in a crash during World War II. The four, flying from Terrell, encountered difficulties over the Kiamichi Mountains of Oklahoma. The AT6 Monument, whose dedication made international headlines with many from Terrell and the United Kingdom present, marks the spot of one of the crashes. City, state and even international dignitaries gathered in Terrell on Friday, September 16, 2011 to mark the opening of the new Major William F. Long Terminal Building.

The City of Terrell, in partnership with the No 1 British Flying Training School Museum, host an annual World War II veterans reunion and air event on the first Saturday of October. This event draws attendees from all over the world. It presents numerous attractions such as vintage aircraft and military vehicles, skydiving, flight simulators, lectures, films, and demonstrations, and activities for every member of the family. The reunion dinner and hangar dance is on Friday night, the fly-in kicks off with a pancake breakfast on Saturday morning, followed by a ceremony and entertainment until the afternoon.

Heritage Jubilee, held the third weekend in April at Ben Gill Park, is a family celebration with a BBQ cook-off, museum tours, arts and crafts exhibition, carnival, live music, a quilt show, an auto show, and other attractions.

All content from Kiddle encyclopedia articles (including the article images and facts) can be freely used under Attribution-ShareAlike license, unless stated otherwise. Cite this article:
Terrell, Texas Facts for Kids. Kiddle Encyclopedia.