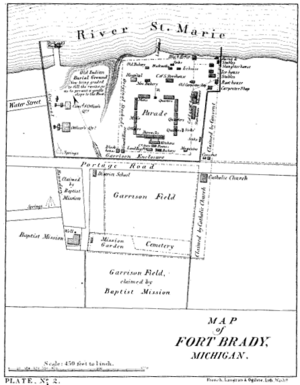 To enhance actual American control of the northwestern frontier against these incursions, especially in the wake of the War of 1812 against the British, the War Department decided to establish several forts along the Great Lakes. Despite several treaties with the British clearly establishing American sovereignty over Michigan Territory, British forces made occasional to frequent incursions from Canada. In 1820, Lewis Cass, governor of Michigan Territory, negotiated the cession of sixteen square miles along the Saint Mary's River (connecting Lake Superior with Lake Huron) from the Chippewa Nation.

In July 1822, Colonel Hugh Brady, with Headquarters and Companies A, B, D, I and K of the 2nd Infantry Regiment, traveled to the Sault to re-assert American authority over the region and establish a garrison there. By the end of the year, Brady had established a fort on a ten-acre site overlooking St. Marys River. The garrison at the fort protected exclusive American sovereignty over the northern frontier. 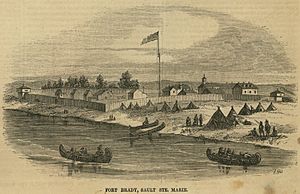 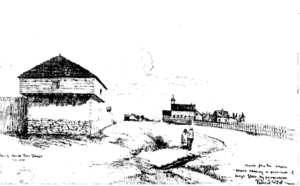 This original fort consisted of a rectangular stockade of cedar posts, with two blockhouses placed at opposite corners. Log buildings were constructed inside along three sides; these included barracks an officer's quarters. Stables and barns servicing the fort were located on the bank of the river, and a garden, garrison field, and cemetery were all located outside the stockade. The entire site covered 26 acres.

The American military presence at Fort Brady counteracted the influence of the British over the region, and their incursions ceased. The success of Colonel Hugh Brady at this mission earned him a promotion to brigadier general. No further armed conflict against the British occurred in the region, and the importance of Fort Brady was reduced. During the 1846–48 Mexican–American War, the Army withdrew troops and the fort was manned by Michigan volunteers. After the conclusion of the war, the volunteers left, and the fort was unoccupied until mid-1849, when US troops returned. The army again abandoned the fort in 1857, when, in response to potential hostilities, the troops were transferred to Fort Snelling in Minnesota.

However, realizing the locks were ripe for sabotage, the Army reoccupied Fort Brady in 1866, with the protection of state locks and canals as the center of the garrison's mission. By this time the buildings and stockade of the original fort were badly dilapidated, and the entire fort was enlarged and rebuilt, with only two structures, the officer's quarters (changed to a hospital) and guardhouse (changed to a bakery), remaining.

In the late 1800s, the shipping canal at Sault Ste. Marie was widened, and the original site of Fort Brady was no longer deemed adequate. General Philip Sheridan selected a more strategic site nearby, on higher ground, and in 1886 work began on constructing a new fort. The new fort, known as "New Fort Brady," was completed in 1893.

The old fort grounds were platted by Assistant Quartermaster George S. Hoyt, and in 1894 sections were auctioned off. In 1909–1910 a post office was built on the site. There is now no visible trace remaining of the original fort. However, archaeologists have found evidence of three walls in the area, and a small re-creation of the stockade wall marks the original location of the fort. In 1970 the site of Old Fort Brady was declared surplus by the US government. 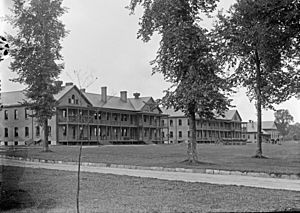 The original site of New Fort Brady consisted on 64 buildings sited on 73 acres. Fourteen of these buildings still exist. They are:

The primary responsibility of the post at New Fort Brady was to protect the canal. Troops from the fort assisted during civil unrest in 1894, and during the Spanish–American War of 1898, two thousand troops passed through the fort for training.

During World War II, 15,000 troops lived at Fort Brady, necessitating various temporary and not-so-temporary construction of habitations and facilities. The 2nd Infantry Division conducted cold-weather training at the fort to determine what equipment would be necessary.

In 1944,before the end of World War II, the Army decided to close the fort as surplus. In 1946, the Army gave the fort to the Michigan College of Mining and Technology (now Michigan Technological University), who established a branch campus at the site. After renovation, the fort was sold to Lake Superior State College (now Lake Superior State University). Many of the original buildings have been replaced, but the major buildings of New Fort Brady have been well-maintained and form the heart of the campus. These buildings are now row houses, the Administration building, Fletcher Center, Brady Hall, South Hall, Brown Hall, East Hall and the Child Care Center.

All content from Kiddle encyclopedia articles (including the article images and facts) can be freely used under Attribution-ShareAlike license, unless stated otherwise. Cite this article:
Fort Brady Facts for Kids. Kiddle Encyclopedia.