Fort Jackson is a historic masonry fort located 40 miles (64 km) up river from the mouth of the Mississippi River in Plaquemines Parish, Louisiana. It was constructed as a coastal defense of New Orleans, between 1822 and 1832, and it was a battle site during the American Civil War. It is a National Historic Landmark. It was damaged by Hurricanes Katrina and Rita, and its condition is threatened. It is marked Battery Millar on some maps, for the Endicott era work built nearby it. 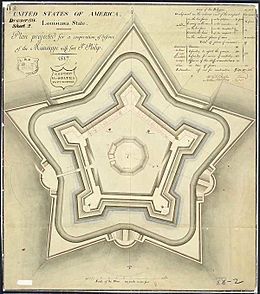 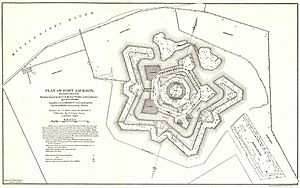 Plan of Fort Jackson showing damage done by the mortar bombardment and gunboats from April 18 to 24, 1862. 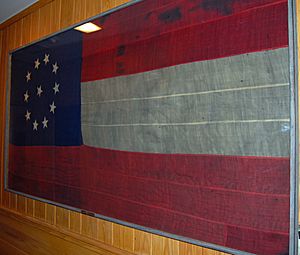 Fort Jackson is situated approximately 70 miles (110 km) south of New Orleans on the western bank of the Mississippi, approximately 2.5 miles (4.0 km) south of Triumph, Louisiana. The older Fort St. Philip is located opposite of Fort Jackson on the eastern bank; this West Bank fort was constructed after the War of 1812 on the advice of Andrew Jackson, for whom it is named.

The fort was occupied off and on for various military purposes from its completion until after World War I, when it served as a training station. It is now a National Historic Landmark and historical museum owned and operated by Plaquemines Parish.

Fort Jackson was the site of the Battle of Forts Jackson and St. Philip from April 16 to April 28, 1862, during the American Civil War. The Confederate-controlled fort was besieged for 12 days by the fleet of U.S. Navy Flag Officer David Farragut. Fort Jackson fell on April 28 after the Union fleet bombarded it and then sailed past its guns. A mutiny against the officers and conditions then occurred and the fort fell to the Union. Union forces then went on to capture New Orleans.

Following the engagement, Fort Jackson was used as a Union prison. It was here that the French champagne magnate Charles Heidsieck was held for seven months on charges of spying.

The fort was declared a National Historic Landmark in 1960.

All content from Kiddle encyclopedia articles (including the article images and facts) can be freely used under Attribution-ShareAlike license, unless stated otherwise. Cite this article:
Fort Jackson, Louisiana Facts for Kids. Kiddle Encyclopedia.