Fort Pike State Historic Site is a decommissioned 19th-century United States fort, named after Brigadier General Zebulon Pike. It was built following the War of 1812 to guard the Rigolets pass in Louisiana, a strait from the Gulf of Mexico, via Lake Borgne, to Lake Pontchartrain bordering New Orleans. It was located near the community of Petite Coquille, now within the city limits of New Orleans.

The fort's ruins were long a tourist attraction, but it was damaged by the Hurricane Katrina storm surge in 2005, and closed for a period. It also had to be closed following Hurricanes Gustav and Isaac in 2008 and 2012, respectively. 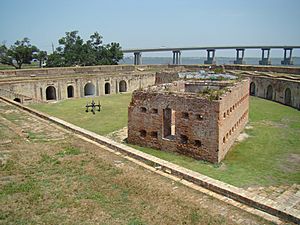 After the War of 1812, the United States built the fort in 1819 to protect New Orleans and the Gulf Coast against British or other invasion of the United States. During the Seminole Wars in Florida through the 1820s, the US temporarily held Seminole Indians here who had been taken prisoner. They were eventually transported to the Seminole Reservation in Indian Territory (now Oklahoma.)

The Louisiana Continental Guard took control of the fort in 1861, just weeks before Louisiana joined the Confederacy and the American Civil War began.

When Union forces captured New Orleans in 1862, the Confederate forces evacuated Fort Pike. The Union reestablished control of the installation, using it as a base for raids. The fort also became a site for training of United States Colored Troops, established in 1864. These soldiers in the South included mostly former slaves.

The fort was abandoned by the United States Army in 1890. No cannon was ever been fired in battle at Fort Pike. It was listed on the National Register of Historic Places in 1972. It was maintained as part of a state park, known as the Fort Pike State Historic Site.

Before Hurricane Katrina, the fort's brick-and-mortar structure was decaying. The 2005 storm surge exacerbated the problems. It temporarily completely submerged the entire fort, and destroyed adjacent state park buildings. The site officially reopened on May 2, 2008. However, due to damage caused by Hurricane Gustav in early September 2008, the park was closed indefinitely. As of June 2009, the fort was open. It is undergoing extensive repairs and restoration work. After Hurricane Isaac in 2012, the fort was closed indefinitely pending repairs and debris cleanup.

The fort was re-opened to visitors following Hurricane Isaac, but closed again in February 2015 due to state budget cuts. 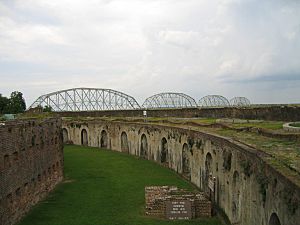 Picture of Fort Pike, before Hurricane Katrina, looking toward the Old Rigolets Bridge (US 90). 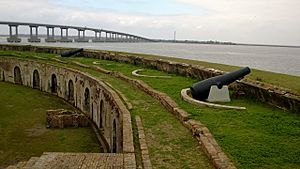 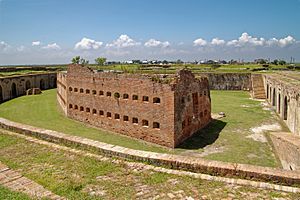 Fort Pike's citadel as seen from atop its rampart (above casemates along the Rigolets, looking south-southwest 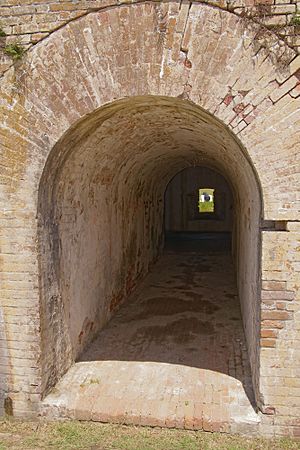 Fort Pike, showing tunnel to casemate northeast of main entrance, casemate itself, gun port, and cannon on display across moat from gun port, between main fort and glacis 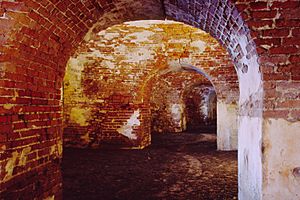 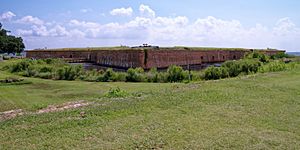 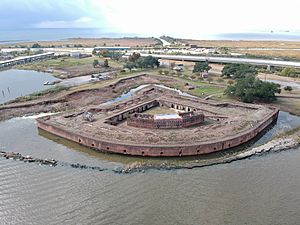 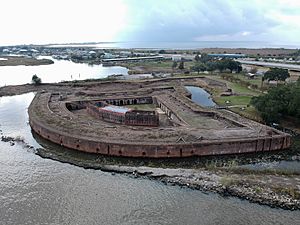 All content from Kiddle encyclopedia articles (including the article images and facts) can be freely used under Attribution-ShareAlike license, unless stated otherwise. Cite this article:
Fort Pike Facts for Kids. Kiddle Encyclopedia.