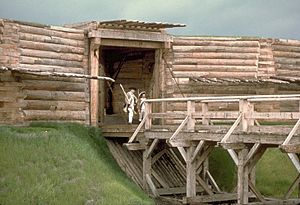 Fort Stanwix National Monument is a historic national monument in Rome, New York, managed by the National Park Service (NPS). The current fort is a reconstruction of the historic Fort Stanwix occupying approximately 16 acres (6.5 ha) of downtown Rome. The fort site—although not the reconstruction itself—is listed in the National Register of Historic Places.

Fort Stanwix is historically significant because of its successful defense by American troops during an August 1777 siege. The fort had been built by the British in 1758 at a strategic site along the water route from Lake Ontario to the Hudson River. After American forces captured and rebuilt the fort during the American Revolutionary War, they were besieged by a British army that invaded from Canada via Lake Ontario, hoping to reach the Hudson River. The British force abandoned the siege, a consequence that helped lead to the defeat of a larger British army during the Saratoga campaign.

Besides the fort reconstruction itself, the national monument includes three short trails that encircle it, one of which follows a portion of the Oneida Carry. The Marinus Willett Collections Management and Education Center preserves the monument's 485,000 artifacts and documents, displays exhibits about Fort Stanwix and the Mohawk Valley, and serves as a regional tourism center.

President Franklin D. Roosevelt signed enabling legislation that created the national monument on August 21, 1935; at that time, the land that would ultimately be used for the monument was occupied by the businesses and residences of downtown Rome. During the 1960s, Rome city leaders lobbied for a fort reconstruction as part of an urban renewal program to help revitalize downtown Rome. Under political pressure from Senator Robert F. Kennedy (D-NY), who was seeking political support in upstate New York, the Park Service reluctantly agreed to build a reconstruction of the Revolutionary War-era fort.

The Park Service completed a master plan for Fort Stanwix in 1967, and in 1970, the NPS began a three-year archaeological investigation. Reconstruction of the fort began in 1974, and the partially completed structure was opened to the public in time for the United States Bicentennial celebration in 1976. The current reconstruction—an earth-and-timber-clad, reinforced concrete structure surrounding three freestanding buildings—was completed in 1978.

From 1976 until the mid-1990s, the national monument explained the significance of the national monument to visitors using first-person interpretation to portray the fort immediately after the siege (1777–78), emphasizing life during the American Revolution. More recently, third-person interpretation has extended visitor understanding to the French and Indian War as well as the role played by the fort during the negotiation of a series of treaties with Native Americans.

All content from Kiddle encyclopedia articles (including the article images and facts) can be freely used under Attribution-ShareAlike license, unless stated otherwise. Cite this article:
Fort Stanwix National Monument Facts for Kids. Kiddle Encyclopedia.