During the 18th and 19th centuries, the French, British and American nations built and occupied a number of forts at Vincennes, Indiana. These outposts commanded a strategic position on the Wabash River.

The first trading post on the Wabash River was established by the Sieur Juchereau, Lieutenant General of Montreal. He, with 34 Canadians, founded the company post 28 October 1702 for the purpose of trading buffalo hides. The post was evidently a success; in the first three years, they collected over 13,000 buffalo hides. When Juchereau died, the post was abandoned, and the settlers left what they considered hostile territory for Mobile, the capital of Louisiana. The exact location of Juchereau's trading post is not known, but because of the crossing of the Buffalo Trace across the Wabash at Vincennes, it is thought by some to have been at or near the modern city of Vincennes. Some other historians place the post 50 miles further south.

François-Marie Bissot, Sieur de Vincennes, acting under the authority of the French colony of Louisiana, constructed a fort in 1731-1732. The outpost was designed to secure the lower Wabash Valley for France, mostly by strengthening ties with the Miami, Wea, and Piankashaw nations. It was named Fort Vincennes in honor of Vincennes, who was captured and burned at the stake during a war with the Chickasaw nation in 1735. In 1736, Louis Groston de Saint-Ange de Bellerive assumed command of the post. He rebuilt the fort, turned the post into a major trading center, and recruited Canadian traders to lure native people to settle there. By 1750, the Piankashaw resettled their village near the post.

On May 18, 1764, St. Ange left the post under British orders to assume command of Fort Chartres. He transferred command to Drouet de Richerville, a local citizen. 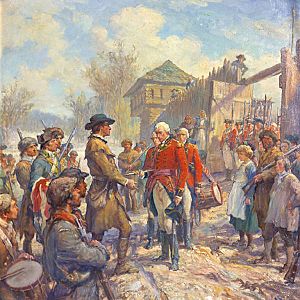 The Capture of Ft. Sackville by Frederick C. Yohn, 1923

British Lt. John Ramsey came to Vincennes in 1766. He took a census of the settlement, built up the fort, and renamed it Fort Sackville in honor of George Germain, Lord Sackville, who had led British forces to victory over the French in the Battle of Minden. The population grew quickly in the years that followed, creating a unique culture of interdependent Native Americans with French and British farmers, craftsmen, and traders. The site of Ft. Sackville was near the present day intersection of First and Main Sts.

Following the French and Indian War, the British and colonial governments could not afford the cost of maintaining frontier posts. They did not station troops in the Wabash Valley at all for a decade following the conflict. Thus Fort Vincennes fell into disrepair, and Vincennes was ordered evacuated due to ongoing lawlessness. The residents united and were able to prove to the British authorities that they were permanent residents, not illegal squatters.

British neglect came to an end on June 2, 1774, the British Parliament passed the Quebec Act, which enlarged the boundaries of the Province of Quebec to include the Ohio Country and Illinois Country, from the Appalachian Mountains on the east, south to the Ohio River, west to the Mississippi River and north to the southern boundary of the Hudson's Bay Company owned region of Rupert's Land. Lieutenant Governor Edward Abbott was sent to Vincennes without troops. Making the best of it, he rebuilt Fort Sackville. Abbott soon resigned, citing lack of support from the crown.

In July 1778, Father Pierre Gibault arrived with news of the alliance between France and the new United States. The Canadien residents took control of the unoccupied Fort Sackville, and George Rogers Clark sent Leonard Helm to command the post. In December, a British force consisting of The King's 8th Regiment and Detroit Volunteers under Lieutenant-Governor Henry Hamilton retook Fort Sackville, and Captain Helm.

Lieutenant Colonel George Rogers Clark marched 130 men through 180 miles of wilderness to Vincennes in February 1779. As he entered town, the French settlers and native peoples joined his force to re-capture Ft. Sackville. Clark had Hamilton's native allies tomahawked to death as an example and sent Hamilton and his men to jail in Williamsburg, Virginia as prisoners. He renamed the post Fort Patrick Henry.

Clark's aim in his wilderness campaigns was to remove the British as a threat to Virginia's settlements in Kentucky, which was then part of Virginia. After accomplishing that objective, he returned to Kentucky in an unsuccessful attempt to raise troops for an assault on Fort Detroit. In spring 1780, the Virginia troops left the Vincennes fort in the hands of local militia.

After the Revolution, several dozen Kentucky families settled in Vincennes. Friction between these Americans, the French local government and the native peoples moved Virginia Governor Patrick Henry to dispatch George Rogers Clark and send troops to the region. Clark arrived at Vincennes in 1786. His attempts to negotiate with neighboring native peoples were unsuccessful. Instead, he created an incident by seizing the goods of Spanish traders, enraging the local population and risking war with Spain. Under orders from the new United States government, Clark and his men left Vincennes in the spring of 1787.

The new United States government built a new fort a few blocks north of the old one and named it Ft. Knox (usually referred to by local historians as Ft. Knox I), after the U.S. Secretary of War. It was located at the present-day intersection of First and Buntin Sts. During the relative peace with both the British and the Indians from 1787–1803, Ft. Knox was the western-most American military outpost. The garrison at Fort Knox and the population at Vincennes did not get along. In 1796, the garrison was ordered not to venture beyond 100 yards of Fort Knox. Territorial Governor William Henry Harrison petitioned Secretary of War Henry Dearborn for money to build a new fort.

In 1803, the federal government approved $200 to build a new fort, and the War Department bought land for the new fort about three miles north of Vincennes, at a Wabash River landing called Petit Rocher, which offered a good view up the river. This fort was also called Ft. Knox, and referred to locally as Ft. Knox II. The sleepy little fort was famous mostly for duels (Captain Thorton Posey shot his second-in-command in 1811) and desertion. But by 1811 disagreements between Gov. Harrison and Indian leader Tecumseh were reaching a head. A new captain, Zachary Taylor, was put in charge of the fort.

Late in 1811 Ft. Knox II had its most important period when it was used as the muster point for Governor Harrison as he gathered his troops, both regular U.S. army and militia, prior to the march to Prophetstown and the Battle of Tippecanoe. After the battle the troops returned to Ft. Knox at Vincennes and several died there from their wounds. The Ft. Knox II site is now a state historic site, close to present-day Ouabache Trails Park on the outskirts of Vincennes, with the outline of the fort marked with short posts and interpretive signage in a park setting.

In 1813, as the War of 1812 increased the chances of attacks by Native Americans, it was determined that the site outside town was too far away to protect the town. Ft. Knox II was disassembled, floated down the Wabash, and reassembled just a few yards from where Ft. Knox I had been.

The Fort Knox II Site was added to the National Register of Historic Places in 1982.

After the war, the threat of attacks again decreased, and friction between residents and soldiers again became an issue. Since the Native American territories decreased and moved farther north, it was decided to move the garrison to Fort Harrison, near Terre Haute, where the troops had won a victory a few years before. On 10 February 1816, the garrison was ordered to Fort Harrison, and Fort Knox was abandoned. Within weeks, Vincennes residents had stripped the fort of all usable materials.

Commanders of Fort Knox (I and II)

The "Muster on the Wabash" is the annual Fall gathering of U.S Army, U.S. Militia, British Mercenaries, and Native American reenactors dedicated to reliving the period's history at Fort Knox II.

All content from Kiddle encyclopedia articles (including the article images and facts) can be freely used under Attribution-ShareAlike license, unless stated otherwise. Cite this article:
Forts of Vincennes, Indiana Facts for Kids. Kiddle Encyclopedia.