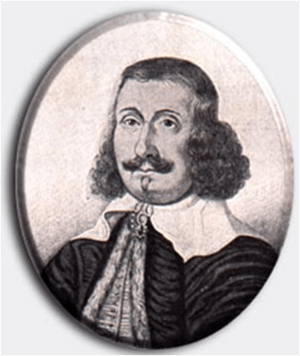 Francis Quarles (about 8 May 1592 – 8 September 1644) was an English poet most notable for his emblem book aptly entitled Emblems.

Francis Quarles was born in Romford, Essex, and baptised there on 8 May 1592. His family had a long history of royal service. His great-grandfather, George Quarles, was Auditor to King Henry VIII, and his father, James Quarles, held places under Queen Elizabeth and James I, for which he was rewarded with an estate called Stewards in Romford. His mother, Joan Dalton, was the daughter and heiress of Eldred Dalton of Mores Place, Hadham. There were eight children in the family; the eldest, Sir Robert Quarles, was knighted by James I in 1608.

Francis Quarles was entered at Christ's College, Cambridge, in 1608, and subsequently joined Lincoln's Inn to read for the bar. In 1613, when Princess Elizabeth married Frederick V of the Electoral Palatinate, Quarles was made her cupbearer and went with her to the continent, remaining in post for some years.

I love the earth - she is my Maker's creature,
She is my mother for she gave me birth.
She is my tender nurse - she gives me food.
But what is a creature, Lord, compared with Thee?
Or what is my mother or my nurse to me?

I love the air - her dainty sweets refresh
My drooping soul and to new sweets invite me.
But what is the air or all the sweets that she
Can bless my soul withal, compared to Thee?

“
”
From the “Delight In God Only” poem by Francis Quarles

Some time before 1629, Quarles was appointed as secretary to James Ussher, Archbishop of Armagh and primate of all Ireland.

About 1633, Quarles returned to England, and spent the next two years in the preparation of his Emblems. In 1639 he was made city chronologer, a post in which Ben Jonson and Thomas Middleton had preceded him. At the outbreak of the Civil War, he took the Royalist side, drawing up three pamphlets in 1644 in support of the king's cause. It is said that his house was searched and his papers destroyed by the Parliamentarians in consequence of these publications.

Quarles married Ursula Woodgate in 1618, by whom he had eighteen children. His son, John Quarles (1624–1665), was exiled to Flanders for his Royalist sympathies and was the author of Fons Lachrymarum (1648) and other poems.

The work by which Quarles is best known, the Emblems, was originally published in 1634, with grotesque illustrations engraved by William Marshall and others. The forty-five prints in the last three books are borrowed from the designs by Boetius à Bolswert for the Pia Desideria (Antwerp, 1624) of Herman Hugo. Each "emblem" consists of a paraphrase from a passage of Scripture, expressed in ornate and metaphorical language, followed by passages from the Christian Fathers, and concluding with an epigram of four lines.

The Emblems was immensely popular with readers, but the critics of the 17th and 18th centuries had no mercy on Quarles. Sir John Suckling in his Sessions of the Poets disrespectfully alluded to him as he "that makes God speak so big in's poetry." Pope in the Dunciad spoke of the Emblems, "Where the pictures for the page atone And Quarles is saved by beauties not his own." 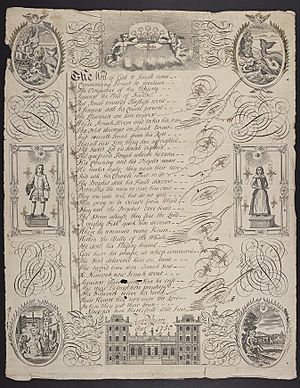 A writing sheet produced by student Anne Passmore, showing the biblical story of Jonah depicted in images and poetry; the first four lines are from Francis Quarles' Argument that begins his poem "A Feast for Wormes."

The works of Quarles include:

An edition of the Emblems (Edinburgh, 1857) was embellished with new illustrations by CH Bennett and WA Rogers These are reproduced in the complete edition (1874) of Quarles included in the "Chertsey Worthies Library" by Dr AB Grosart, who provides an introductory memoir and an appreciation of Quarles's value as a poet.

Among Quarles’s many descendants, Charles Henry Langston and John Mercer Langston were American abolitionists who pressed for greater freedom and suffrages among the African Americans in the 19th century. Charles Henry Langston's grandson Langston Hughes became a celebrated author and poet during the Harlem Renaissance.

All content from Kiddle encyclopedia articles (including the article images and facts) can be freely used under Attribution-ShareAlike license, unless stated otherwise. Cite this article:
Francis Quarles Facts for Kids. Kiddle Encyclopedia.