Fridley is a city in Anoka County, Minnesota, United States. The population was 27,208 at the 2010 census. It was incorporated in 1949 as a village and became a city in 1957. It is part of the Twin Cities Metropolitan Area. Fridley is a "first ring" or "inner ring" suburb in the northern part of the Twin Cities. It borders Minneapolis at its southern border. Neighboring first ring suburbs are Columbia Heights and Brooklyn Center.

Fridley shares the Climate of the Twin Cities and Climate of Minnesota.

Interstate 694 and Minnesota State Highways 47 and 65 are three of the main routes in the city. East River Road is one of the oldest roads in the state as a Minnesota Territorial road. It was part of the Red River Oxcart Trail.

The Fridley Station is served by the Northstar Commuter Rail line running on the BNSF tracks into Minneapolis.

The BNSF Railway main Northern transcontinental Twin Cities to Portland/Seattle double track line passes through Fridley as part of the Staples Subdivision. The Amtrak Empire Builder passes through Fridley twice daily on this line, but does not stop within the city. The massive BNSF Northtown Classification Yards are located in the city. The Minnesota Commercial Railway also serves Fridley, with a terminal warehouse located there.

The Mississippi River is not navigable for barge traffic north of the Canadian Pacific Camden Place Rail Bridge, however small boats can travel upstream to the Coon Rapids Dam without a portage. There is a boat landing for small boats in the river near Interstate 694.

The post-European/American settlement history of Fridley begins with the construction of the Red River Ox Cart Trail in 1844, which traveled through Minnesota Territory from Saint Paul (present day Minnesota) to Pembina (present day North Dakota), now East River Road (also Anoka County Highway 1). The road was used to transport furs to the south and other various supplies to the Red River Valley settlers in the north.

In 1847, John Banfill became the first settler in the area, which was known at the time as Manomin. Manomin is a variant spelling of manoomin, the Ojibwe word for wild rice, a staple of their diet. It comprised the modern-day municipalities of Columbia Heights, Fridley, Hilltop, and Spring Lake Park.

The area soon grew quickly in size. In 1851, Banfill platted the actual town of Manomin. There, a general store and sawmill were built next to Rice Creek, named after Henry Mower Rice, a settler who just two years earlier had acquired a lot of land in the area. In 1853, the first town post office was in operation, and a year later, a ferry crossing the Mississippi River was established. 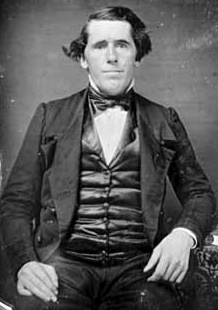 Abram M. Fridley, for whom the city is named.

In 1855, Abram M. Fridley, for whom the city is named, was elected as the first territorial representative for the area.

In 1857, the area separated from Ramsey County; Manomin County was established, and it became the smallest county in the United States, having only 18 sections. This distinction was short-lived, after it was annexed by Anoka County in 1870 and became a township with the same name.

In 1879, the Minnesota State Legislature, of which Abram M. Fridley was still a member, changed the township's name to bear his last name.

In 1949, the village of Fridley was incorporated. The Fridley Free Press was also established. A lawsuit that challenged the incorporation of the village caused the funds to be frozen. Minnesota state law allowed cities to operate municipal liquor stores. The Fridley Liquor store proceeds were the primary funding for the daily city operations until the lawsuit was resolved in 1950.

On May 6, 1965, Fridley was hit by two F4 tornadoes. One out of every four homes in the city was destroyed or damaged. The second twister that hit was the deadliest storm in Twin Cities history (see 1965 Twin Cities tornado outbreak), which killed a total of 13 people.

In 1970, Fridley began purchasing land which would become the Springbrook Nature Center.

Medtronic Operational Headquarters is a major employer in Fridley.

On September 21, 2005, Fridley was struck by straight-line winds exceeding 80 mph (130 km/h), toppling many old growth trees as large as 2.5 feet (0.76 m) in diameter and in turn, destroying dozens of homes and several vehicles. Cleanup efforts took as long as a week, leaving hundreds of residents stranded in their homes without power, unable to drive until streets were cleared of debris. This same storm also affected Brooklyn Center, New Brighton, Brooklyn Park, Coon Rapids, Spring Lake Park and Blaine, as well as other communities in the surrounding North Metro area.

Fridley has one of the first six stations of the Northstar Commuter Rail line connecting the northwest suburbs and downtown Minneapolis; the line opened in November 2009.

Fridley is home to the 127-acre (0.51 km2) Springbrook Nature Center park and nature reserve on its northern border with Coon Rapids. The western border of Fridley comprises the Mississippi National River and Recreation Area. Portions of islands within the recreation area are within the Fridley city limits.

Fridley has the following Anoka County parks within the city:

The city festival is named "49'er" days, which commemorates the 1949 incorporation. It is usually held in mid June.

There were 11,110 households of which 30.2% had children under the age of 18 living with them, 43.4% were married couples living together, 14.1% had a female householder with no husband present, 6.1% had a male householder with no wife present, and 36.5% were non-families. 28.8% of all households were made up of individuals and 8.6% had someone living alone who was 65 years of age or older. The average household size was 2.44 and the average family size was 2.99.

There were 11,328 households out of which 28.2% had children under the age of 18 living with them, 48.6% were married couples living together, 11.6% had a female householder with no husband present, and 35.4% were non-families. 26.8% of all households were made up of individuals and 6.3% had someone living alone who was 65 years of age or older. The average household size was 2.40 and the average family size was 2.91.

All content from Kiddle encyclopedia articles (including the article images and facts) can be freely used under Attribution-ShareAlike license, unless stated otherwise. Cite this article:
Fridley, Minnesota Facts for Kids. Kiddle Encyclopedia.