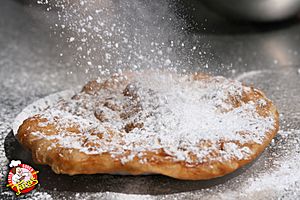 Fried dough is a North American food associated with outdoor food stands in carnivals, amusement parks, fairs, rodeos, and seaside resorts (though it can be made at home). "Fried dough" is the specific name for a particular variety of fried bread made of a yeast dough; see the accompanying images for an example of use on carnival-booth signs. Fried dough is also known as fry dough, fry bread, fried bread, doughboys, elephant ears, scones, pizza fritte, funnel cake, frying saucers, and buñuelos (in the case of smaller pieces). These foods are virtually identical to each other, and recognizably different from other fried dough foods such as doughnuts, beignets, or fritters.

In Canadian cuisine, pieces of fried dough are sometimes called beaver tails. According to Bill Castleman, a writer of books on Canadian word origins, the name referred to quick-baked dough "especially in early 19th-century places where people might camp for one night and where there was no frying pan." In 1978, Pam and Grant Hooker of Ottawa, Ontario, founded the BeaverTails chain of restaurants specializing in the sale of fried dough pastries which are hand stretched to the shape of a beaver's tail.

In Newfoundland, a province in Eastern Canada, fried dough is referred to as a "touton". A touton /ˈtaʊtən is produced by frying bread dough on a pan with butter or the leftover fat from "scrunchions" (fried preserved pork) and served with dark molasses, maple syrup, or corn syrup. It is traditionally made from leftover bread dough and pan-fried, as opposed to deep-fried.

A smaller Italian variant common in North America is the zeppole.

Similar food is found in Europe, also typically from outdoor stands in fairs. For example, in Croatia, fried dough is known as languši, in Hungary as lángos, in Austria as kiachl, in Germany as Knieküchle while the oliebol is eaten in the Netherlands.

A type of soft, fried dough ball frequently coated in sugar can be found in some Chinese restaurants in New York. These dough balls are referred to by any one of a number of names, including but not necessarily limited to "sugar biscuits", "Chinese doughnuts", or the simpler "fried bread".

Fried dough is made by deep-frying a portion of risen yeast dough. The dough acquires an irregular, bubbly appearance from being fried.

The dough may then be sprinkled with a variety of toppings, such as granulated sugar, powdered sugar, cinnamon, fruit sauce, chocolate sauce, cheese, maple syrup, whipped cream, tomato sauce, garlic butter, lemon juice, honey, butter, nuts, or a combination of these.

All content from Kiddle encyclopedia articles (including the article images and facts) can be freely used under Attribution-ShareAlike license, unless stated otherwise. Cite this article:
Fried dough Facts for Kids. Kiddle Encyclopedia.