Touton (or toutin) refers to a popular traditional dish from Newfoundland and Labrador (NL), most usually thought of as a pancake-like bread dough commonly made with risen dough. Although pancakes are rarely made from homemade bread dough in NL today, the memory of regional terms still exists in younger generations, such as the British English term tiffin, meaning "small lunch". The dish has a long list of regionally-distinct names, and can refer to two (or more) different types of baked or fried dough: the dough cake variant, usually fried; and a baked bun variant, made with pork fat. Toutons are usually served at breakfast or brunch and can still be found quite commonly on the breakfast menus of many local restaurants.

The most widely-accepted definition of a touton refers to the dish produced by frying bread dough on a pan in butter or pork fat. Fried bread dough is not unique to Newfoundland and Labrador, Acadian lard-fried Croix en d'Jeu being one example from outside the region. Toutons are often made from leftover bread dough, or dough that was left to rise overnight, such as this description from North River, Conception Bay, 1966:

Risen bread dough pulled flat like a pancake, and fried in pork fat (salt) or margarine. It was usually served for breakfast because with slow rising yeast, bread was mixed in the evening, allowed to rise during the night, and was baked the next day.

They were sometimes a treat for children, who were fed them so they wouldn’t gobble up all the fresh-baked bread. There was no exact recipe for touton/bread dough in outport communities; each maker generally relied on recipes and techniques passed down orally or through observation. Folklorist Andrea McGuire documented this in an interview with Mary (Murphy) King, originally of Ship Cove, Placentia Bay, who spoke of her mother's interactions with American servicemen in the mid twentieth century:

A few of the men “worshipped mom for her bread and her stews and stuff like that … Another thing they never could understand were toutons.” The men would ask Mary’s mother for her bread and touton recipe, which baffled her a little. She would say, “There’s no recipe, you just mix a bit of this and a bit of that,” but as Mary put it, “Now, they were just as wise as my cat would be, you know, because they couldn’t understand—if you didn’t have a recipe, how would you make bread?”

It is much rarer to find them cooked in fatback pork today; the toutons found in local restaurants are more likely fried in a combination of olive oil, clarified butter, or canola oil.

One of the most common regional names for toutons, generally found in the Bonavista Bay and Central Newfoundland region, though there are outliers in Labrador and Conception Bay North:

Some of these terms appear remarkably limited in their regional distribution. Tiffin, for example, appears to be localized in a handful of communities in Northern Bonavista Bay, yet students from one southern Bonavista Bay community reported this term with the meaning 'small lunch', a meaning which also occurs in regional British as well as in Indian English.

The manufacture of tiffins is similar to descriptions given above for toutons. One 1979 account from Bonavista Bay relates,

When mother was making bread and dough has risen she would cut pieces off, about the size of a doughnut and fry them. These were tiffins. Some people also call them scons but this may not be restricted to Wesleyville.

The traditional accompaniment to toutons is a drizzle of molasses or pat of butter. Less common condiments could include maple syrup, sugar, corn syrup, or fruit jam, though the use of these causes consternation for some foodways purists. An alternative to straight molasses is coady (also cody or lassy coady, a molasses sauce) made thusly, "Boil for I0 minutes - I cup molasses, 1/4 cup water, 3 tbsp. butter and I tbsp. vinegar" or by any number of alternative recipes.

In some parts of Newfoundland, a touton is a baked cake or bun, often made with diced salted pork in the dough. In 1971, mother and housewife Marie Harris of Glovertown provided this "old Nfld recipe passed on orally among friends & mothers to daughters":

...a plain tea cake made of flour, sugar, water (or milk), butter, salt & small pieces of white pork. This was well mixed until it formed a dough which was rolled to a thickness of 1/3 - 1/2 inch and then cut into circles. The cakes were baked in an ovan [sic] of 350F and eaten when ready, hot or cold (Delicious cakes). [also add baking powder to ingredients!] Not to be confused with tiffins.

Another typical description is the one given by Mr. Margaret Cook (born in Coachman's Cove) to folklorist John Widdowson in 1964:

The toutons then, you take them an' roll them up with the pork, see - pork toutons. No, no, not bread, no, just the flour. Take the flour an' put the pork in and the bakin' powders, whatever you have an' then roll them an bake ('em). That's the toutons.

Another regional variant that uses potatoes as the main ingredient was prepared in the Bonavista and Elliston, (Maberly) region of the Bonavista Peninsula from the early twentieth century onwards. 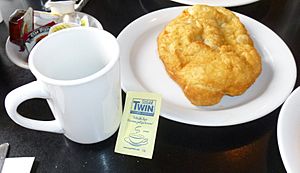 A wide range of regional names exist for toutons, made complicated by the fact that different speakers may be referencing any of the major variants above, and that some of the terms applied to toutons (eg bang belly or flapjacks) may also refer to altogether different foodstuffs.

All content from Kiddle encyclopedia articles (including the article images and facts) can be freely used under Attribution-ShareAlike license, unless stated otherwise. Cite this article:
Touton Facts for Kids. Kiddle Encyclopedia.